Since my dad is on half-day today , so we decided to go for lunch together ,we brought my cousin bro as well as its school holiday now , we then headed to this restaurant which located in I-Avenue,Bukit Jambul (u can find this restaurant if u heading towards queensbay ,the Bukit Jambul roundabout)........so this is a korean BBQ based restaurant and obviously they serve BBQ and korean stuff XD......and i was amazed with their decoration and all the cooking utensils they erected........below are some shots on the deco : 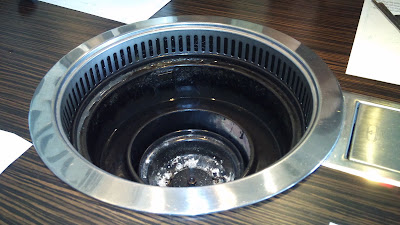 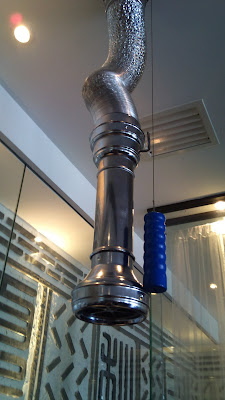 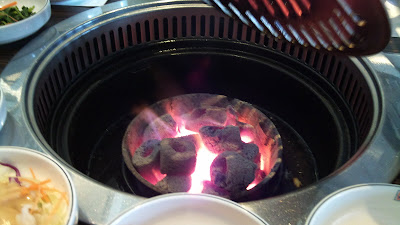 The little pipe there was used to suck up all the smoke and the oily gases , and surprisingly it speeds up the burning of the charcoal , making our meat cooks faster 0.0 and they used charcoal for the BBQ part =D which i think its a very good idea as we all know that charcoal will give the meat a very special taste 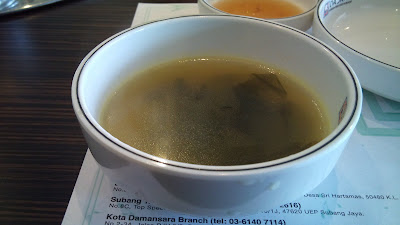 So after we placed our orders , we were served with a bowl of soup which i think its cooked with some sort of seaweed which i found quite similar to the japanese style , and of coz , the taste is superb 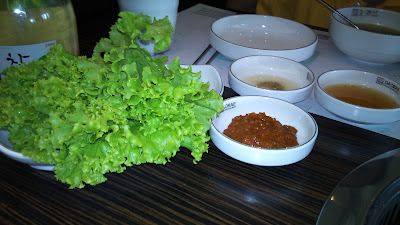 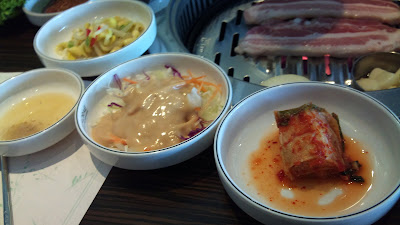 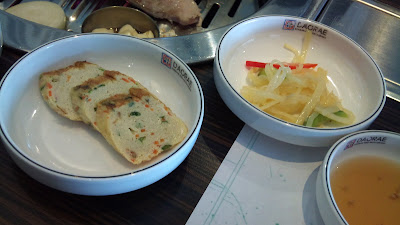 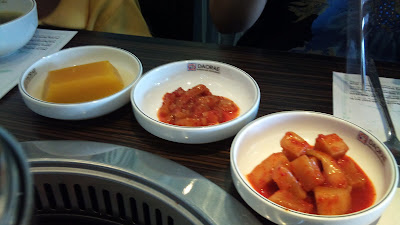 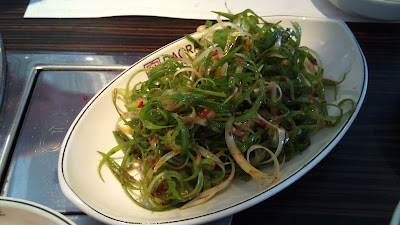 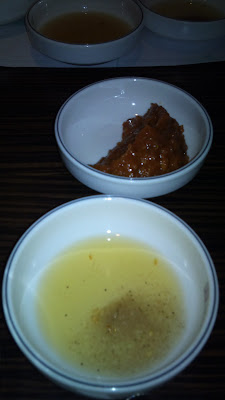 Then , we were introduced to their appetizer(only be served free if u ordered the BBQ meat but not the steamboat or others) and various kinds of sauce that work with the meat ,its too long to tell about the taste but i like the kimchi the most as its sour and spicy at the same time but not too salty ,i think this is probably one of the best kimchi that i ever had , and just in case u are curious on wat is the sauce below the miso , its fried salt in herbs , in chinese , we called it 'hua yan'(mandarin) or 'wah yim' in cantonese 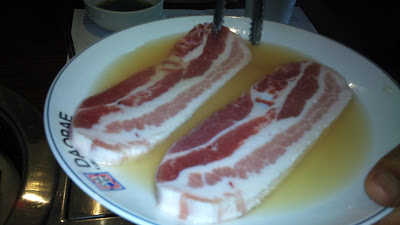 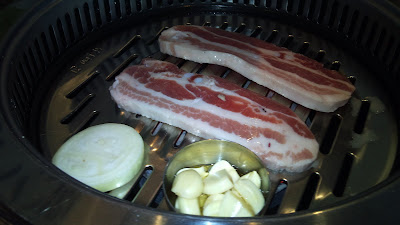 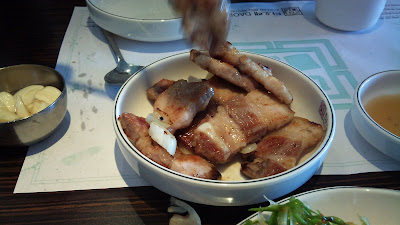 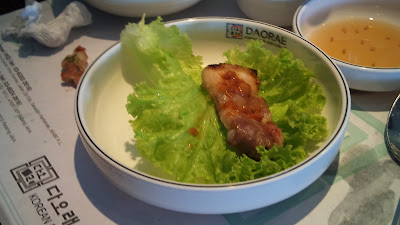 Pork Belly soaked in ginseng essence (rm30)......as u can see , 2 slices of the pork belly was grilled till perfect and the white thingy there was onion and a few cloves of garlics(soaked in olive oil) .....not really sure about the taste as i don eat pork =) , but my parents told me the pork belly don really seem to have strong flavour of ginseng , in fact , its like a normal pork belly 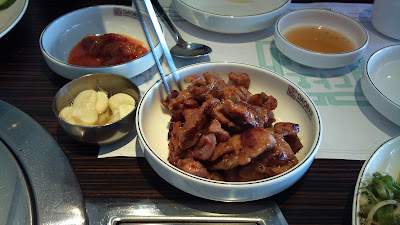 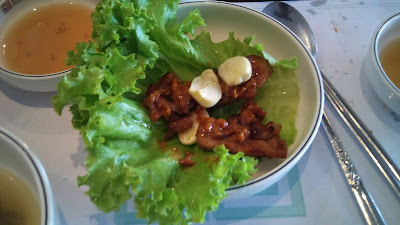 Chicken slices in special sauce (rm27) ....din really shoot the chicken BBQ part as its kinda similar to the pork , the chicken is so fragrant and it was grilled to perfect , somehow like the japanese style of grill chicken ,teppanyaki ? 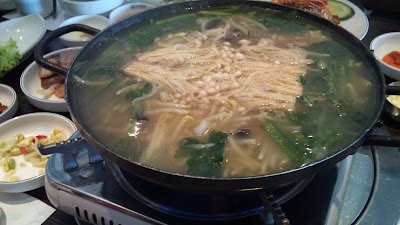 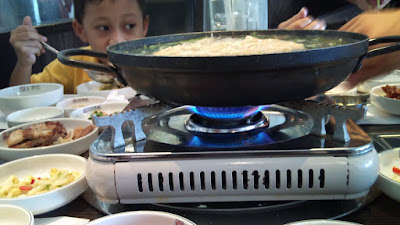 Some sort of fish steamboat , don really know the name of the fish as its in korean >.<.....anyway , its rm70 for this steamboat thingy , the fish were fresh , and they actually put in tons of vege especially bean sprouts but the soup is extremely tasty , u can even taste the natural sweetness of the fish inside the soup 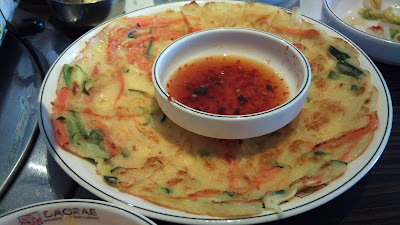 We were given a free korean style pancake =D by the manager......its very thin yet tasty pancake , especially the sauce , it just light up the whole thing XD 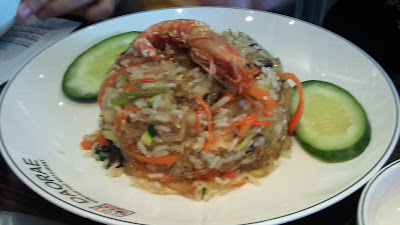 Seafood Fried rice for my little cousin bro (rm17).....taste extremely good as well , especially the texture of the rice , its so spongy and aromatic , sry for the poor quality of photo though , hands were shaky that time as i cant resist all the food in front of me :P 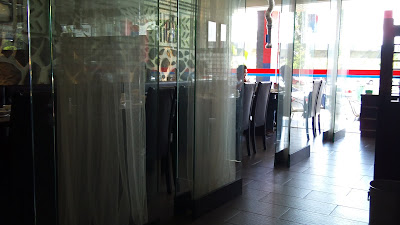 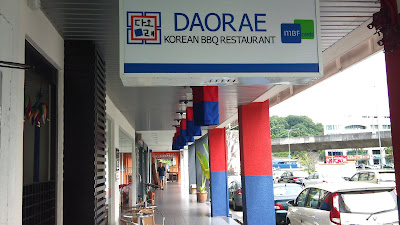 My impression towards this restaurant is quite good as the service is good yet the price is considerably reasonable......so bill totalled up rm158.40 , 10% of service charge and NO govt tax
Labels: barbecue, bayan baru, grill, korean cuisine, seafood, steamboat