Went to this restaurant for lunch today , had been seeing tons of advertisement of Komtar Walk (in front of komtar of coz) since their opening ceremony , so we were quite interested to take a look at it.....there are 2 restaurants out there and station 1 cafe is 1 of them , another 1 would be a branch for penang road's cendol , this restaurant serves fusion style cuisine which they offer a wide range of food such as western , chinese , malay etc......and they are non-halal cafeteria =).....so anyway , cut the crap , here are some orders of the day :P 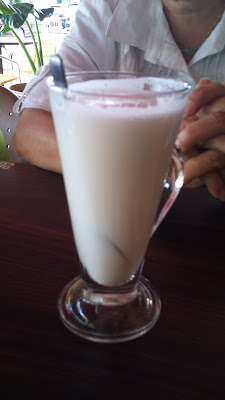 Hot Honey Milk (rm4.90).....a very strong flavour of vanila , taste like coconut milk as well......i think they might put a few drops of vanila extract so that the flavour became so strong =( 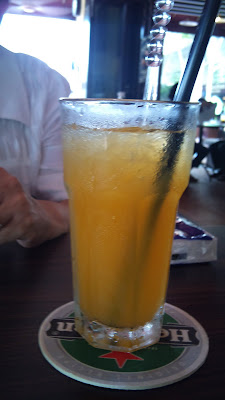 Just an ordinary orange juice >.<.....its free if u order their set meals , and of coz , prices varies for every set meal 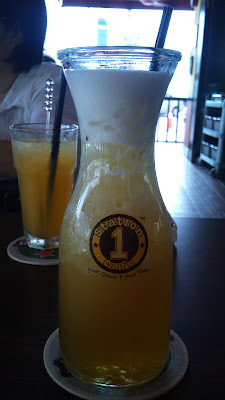 My cold yestea (rm4.60) , looks cool right but its just an ordinary green tea =(....anyway , comes with big bottles just as u see >.<.....not sweet at all , its quite good if u were to have a long conversation with ur frens and family =) 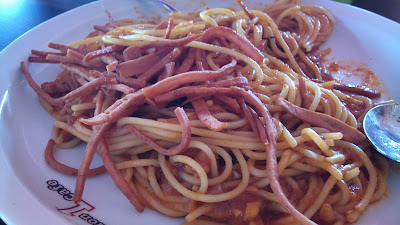 This is the main course for the set meal --Spaghetti Marinara (rm7.90 for a set) , also there will be a bowl of soup given for every set as well (free of coz).....taste great but there isnt any other ingredients beside the ham =( , and those ham slices are tasteless coz they deep fried it just like french fries =X.....but overall this is a pretty decent spaghetti 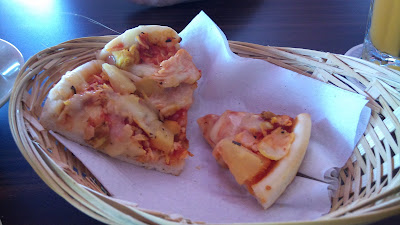 Their so called 'Hawaian Pizza' (rm 4.90)......taste sucks , isnt it abit pathetic for such small size pizza and this was my mom's order by the way =X 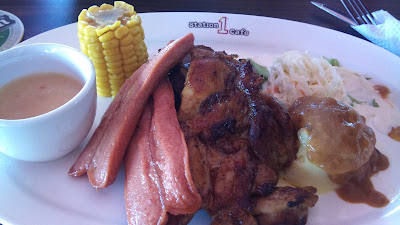 My mixed grill (rm 22.90).....comes with a HUGE portion =) which consists of lamb chop , steak , chicken chop and 2 sausages =D......everything is just perfectly grilled , taste is just awesome , there will be 3 types of sauces for u to choose as well and i chose special salad sauce , i guess the word 'special' attracted me XD.....mashed potato was just ok , salad is decent as well......i would say that its kinda cheap as the portion is really big ^^ 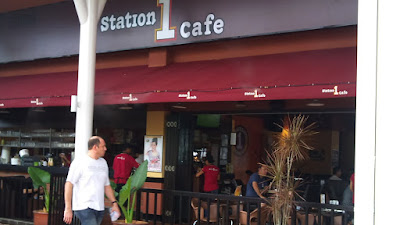 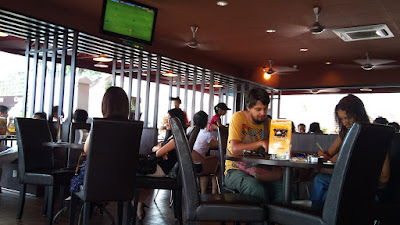 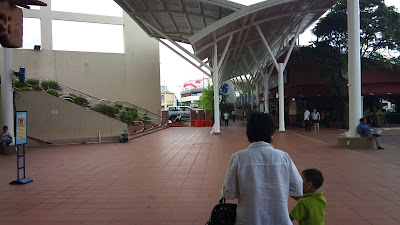 Just some random photos regarding the komtar walk and poor mom and my little cousin bro , they became model of the day yet they donno about it XD......so there will be a 10% service charge and NO govt tax , bill totalled rm 47.90......which is a very reasonable price i think
To my colleagues in chong cheng : This would be the venue for the farewell , i decided to change to this as i felt this restaurant is really special and suitable for conversations =).....looking forward to thurs XD
Labels: coffee, georgetown, local cuisine, Nyonya cuisine, seafood, western cuisine