Had japanese food as lunch just now as my dad has successfully collected 10 stamps given by the restaurant....upon presenting it , we will be given rm20 discounts XD.....but just me and my mom went though......prices were unbelievably expensive.....here are some orders (everything we ordered is a bento set which means it comes with a bowl of rice , salad and miso soup) : 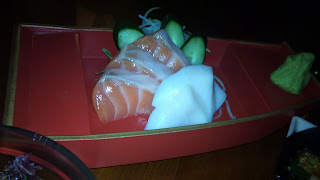 Sashimi set (rm25) for just 6 slices of sashimi !!!! *sick-ness*....but wat i must say is their sashimi is damn fresh and unlike sushi king or sakae , the sashimi was cut to a certain thickness which is much more thicker .......its like the salmon swims in ur mouth when u chew it XD.....also , their wasabi was freshly grated not those like toothpaste-packing type.....which u can actually taste some mild taste of wasabi 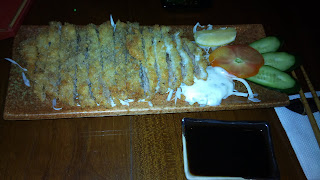 Beef Cutlet (rm22).....was damn crunchy and aromatic , beef was tender and juicy enough , works perfectly well with the sauce(no idea wat sauce it is , but abit sourish taste) , gently dip it into the sauce and serve with a mouthfull of rice allows u enchance more about the fragrant of beef....... 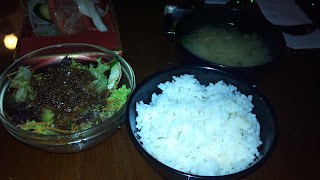 Every set comes with a big bowl of rice , a miso soup and a bowl of salad. Their miso soup was the best that i'd ever tried.....u can taste the very strong flavour of miso but i heard there are 2 kinds of miso (red and white ?)....not sure if u can ask for the other type....and the salad dressing was special , sourish but its not made up of cider or vineger , maybe some sort of japanese stuff =P 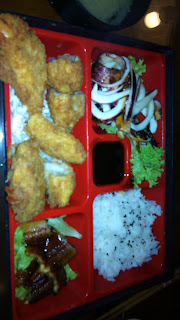 Some error occured , the pic flipped opposite >.< , pls bear with it as i couldnt fix it , so this is my mom's seafood bento set (rm40) , inclusive of fried shrimp , clamps , and eel , serving portion was unbelievably big....my mom coulndt finish it XD.....taste was pretty decent as we don really adore fried food. 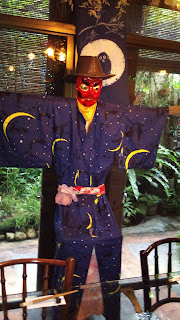 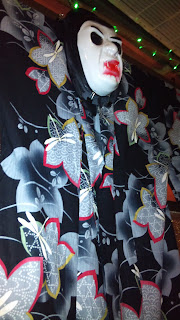