Tian Ding Xiang (天鼎香) Chinese Restaurant needs no introduction, it is one of the most popular family-meal spots within the infamous shopping mall- Gurney Plaza. If you have never been there before, try to hit this place up during your next visit to Gurney Plaza. Tian Ding Xiang has an extensive menu featuring some uncommonly seen Chinese dishes; Peking Roasted Duck, a wide variety of Double Boiled Soup just to name a few. I was fortunate to be invited to sample some of their meticulously designed new dishes which were launched few days ago. To read my previous review on the restaurant, please click the link here.


Many Thanks to Sherlyne for extending the invitation. 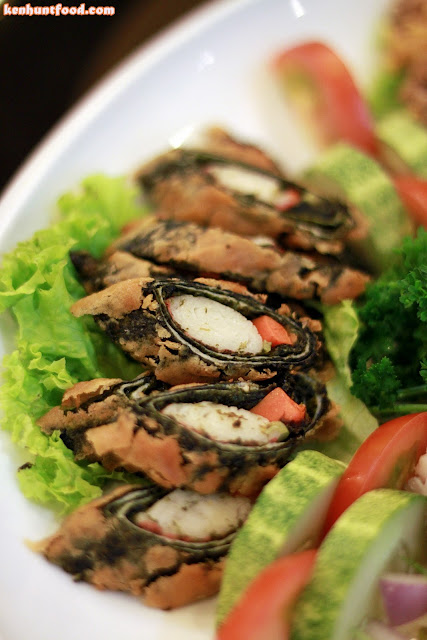 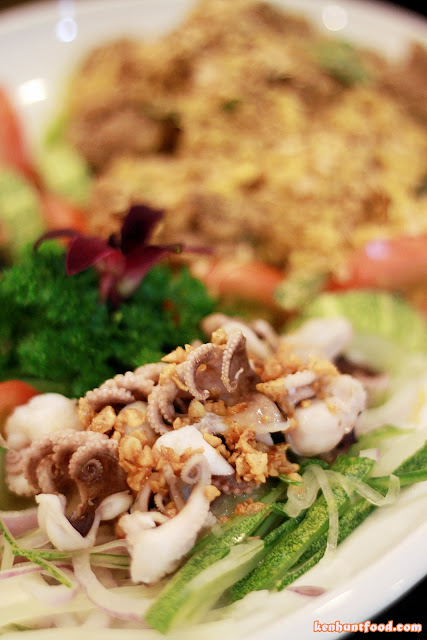 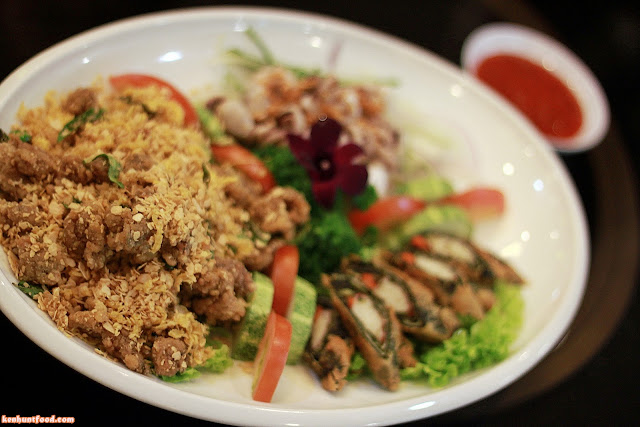 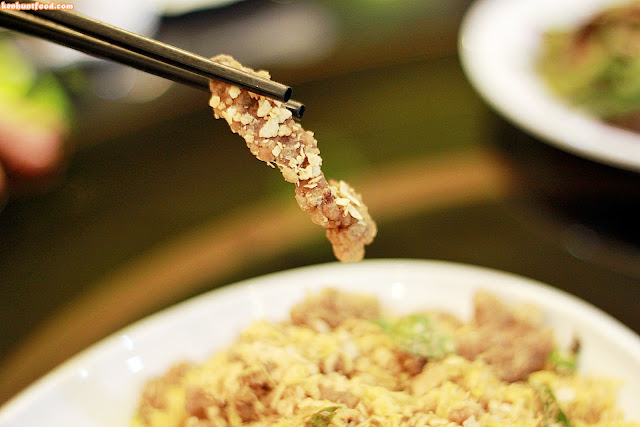 The meal started with this entree- Trio Platter (Rm 42.80) which comes in three separate starters namely Butter Oat Chicken, Blanched Baby Octopus and Deep Fried Seaweed Wrap. "We hope to cater for those who are coming in group of 10 and wish to savor something similar like this at more affordable price", explained by Sherlyne. Despite the fact that the Baby Octopus were fresh but things would be perfect if they were slightly bigger in size for a better bite. While it was not out-of-the-world-good, it was a satisfyingly comforting dish that you can eat on a regular basis. 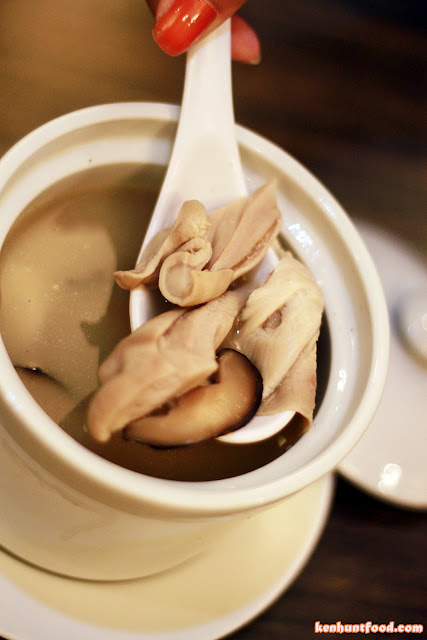 This hearty Double Boiled Pig Stomach with White Pepper Soup (Rm 16.80) is one of the newly introduced Double Boiled Soup. The Soup was reasonably flavored with an intense peppery flavor, along with a hint of aroma from Dried Shitake Mushrooms. Nevertheless, it was a pleasingly soothing Soup to savor; my only gripe could be the price, which priced slightly on the high side. 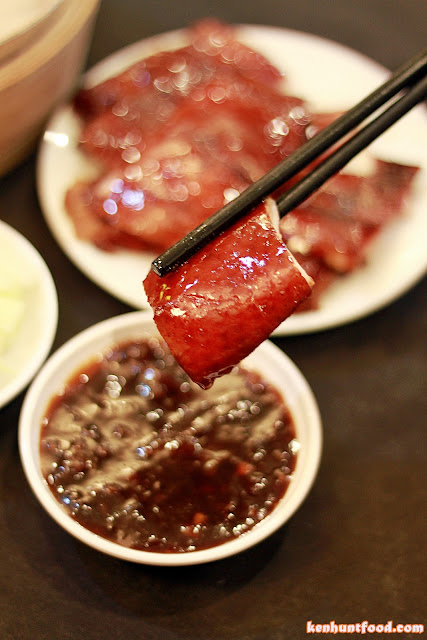 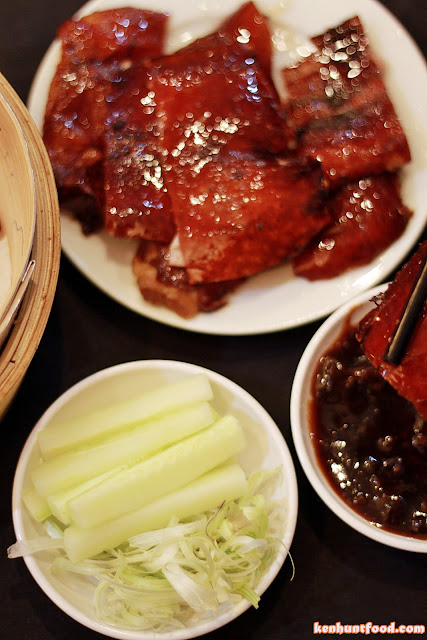 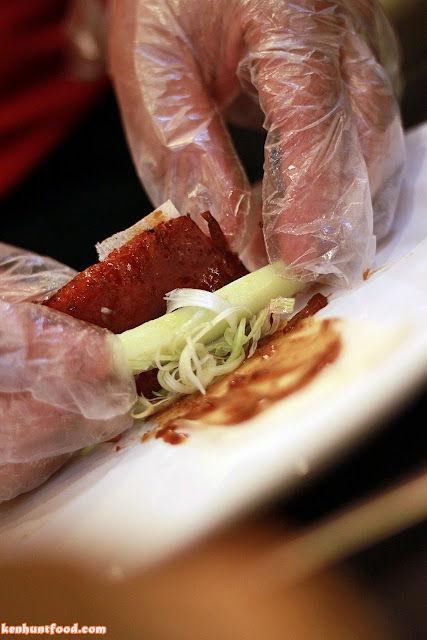 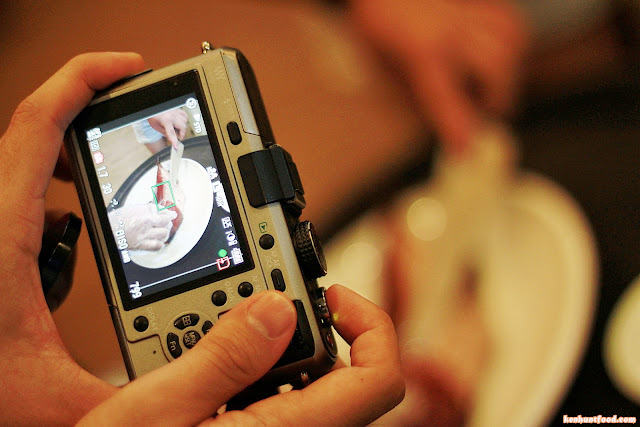 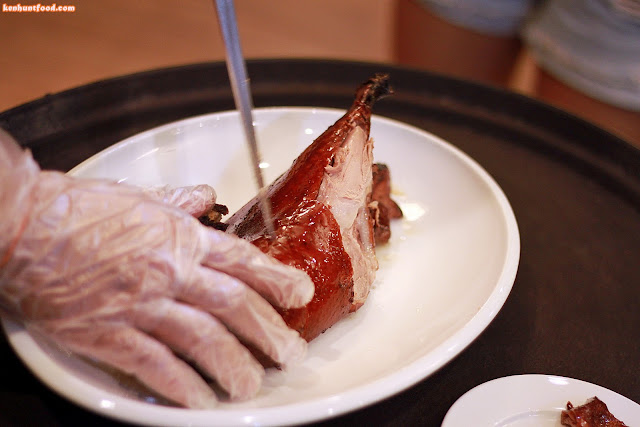 Tian Ding Xiang is famous for its Peking Duck (Whole Bird- Rm 68.80/ Half Bird- Rm 38.80) where the Roasted Duck will be served in two ways- the traditional wrap with the crisp Roasted Duck Skin and your choice of serving the Duck Meat. A waiter will slice the Duck Skin upon serving to the table, making the scene more enlivened and appetizing. The condiments to go with the crisp Duck Skin were Spring Onions, Cucumbers and the sweet dipping Roasted Duck sauce. 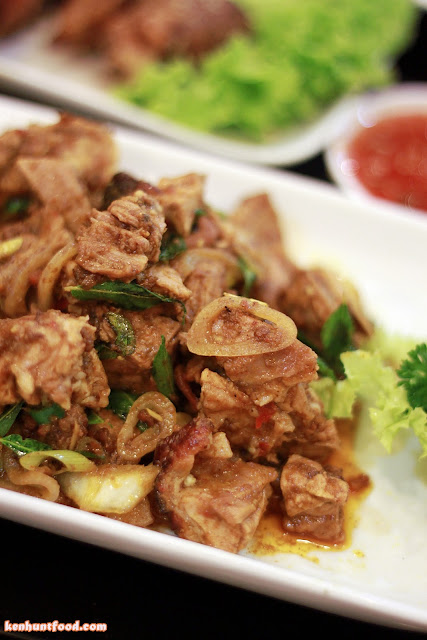 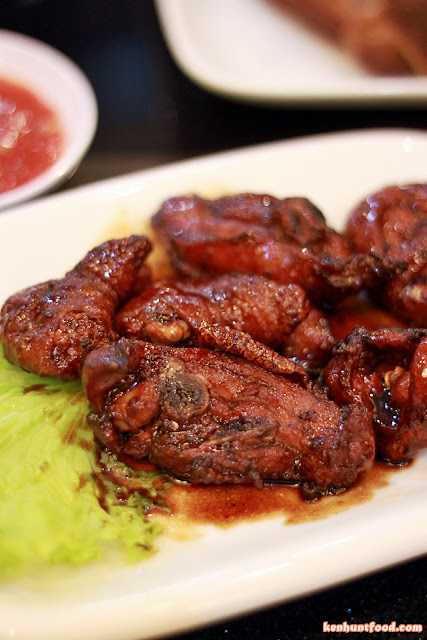 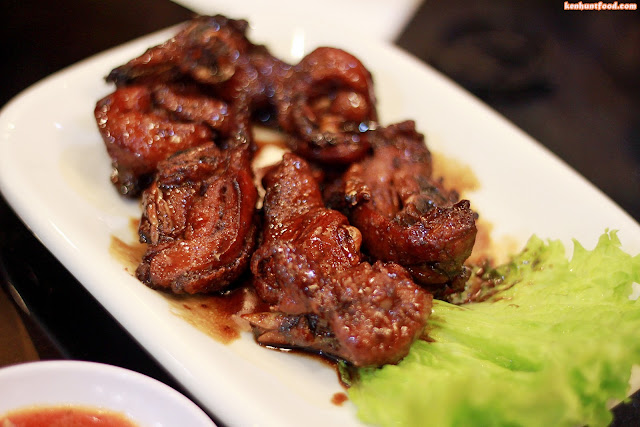 This enticing dish- Sauteed Chicken Cutlet with Marmite (Rm 15.80) is another worth-mentioning choice. The Deep Frying process of the Chicken adds layered dimension to the texture of the Chicken, giving them a slightly crisp and crunchy texture on the edges; while the Marmite sauce was prepared in an aesthetically pleasing way. However, it would be ideal if they could serve in a bigger portion. 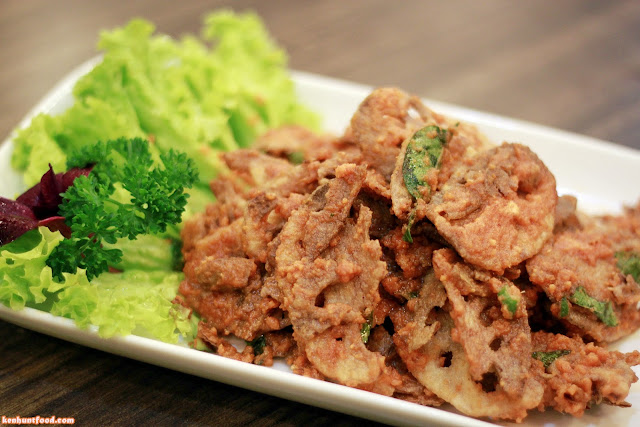 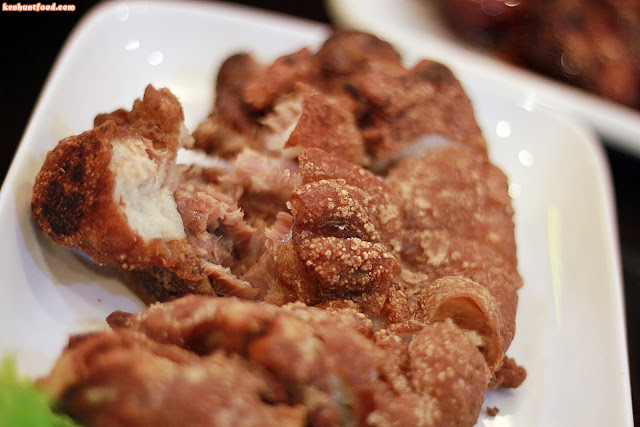 This beautifully done Crispy Pork Knuckle (Rm 30.80) would make any meat lover weak in the knees, we were rather surprised by its gigantic portion. Served together with Thai Sweet Chili Sauce, the dish has an obvious Thai twist, together with their own elements. A must-try item for Pork lovers. 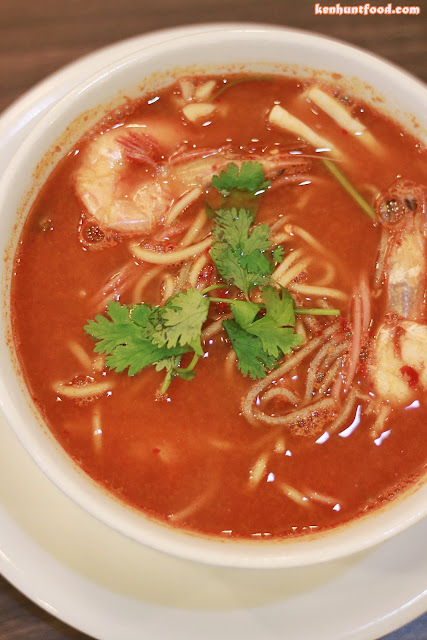 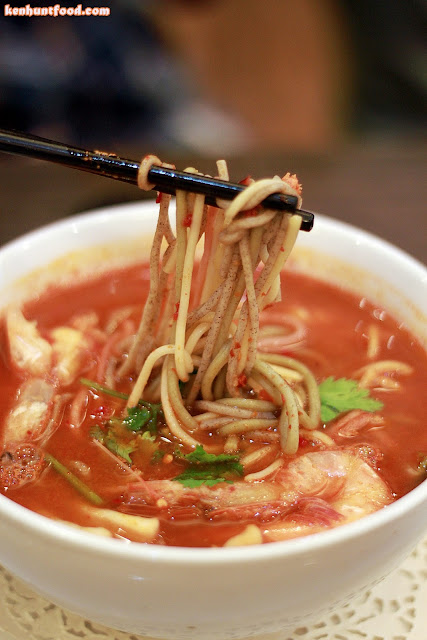 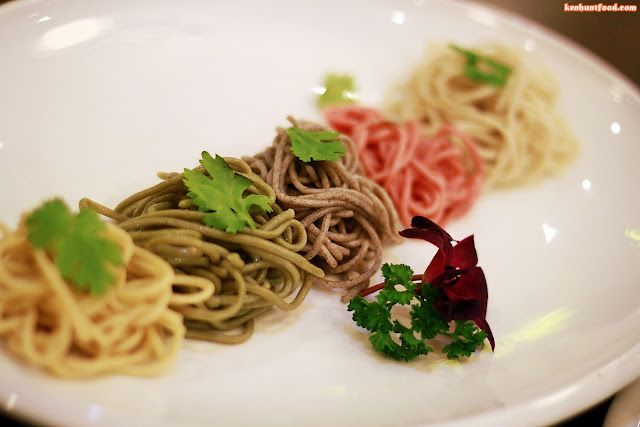 Intrigued by its colorful presentation, their Fresh Seafood Ramen (Rm 20.80) caught most of our immediate attention; colors are believed to stimulate one's appetite according to some experts. There will be 5 flavors of flavored Ramen in total- Original (Wheat), Spinach, Pumpkin, Purple Cabbage and Black Sesame, all 5 flavors will be served in a bowl of Fresh Seafood Ramen if you must know. While the texture of the noodles was silky smooth, we couldn't tell if they were al-dente as it would be unfair for us to judge since it took us quite some time to photograph this dish. The fiery hot broth was flavorful and reasonably seasoned, as told by Sherlyne, the spiciness can be divided into 10 levels in total, we had level 2 which was shattering hot. No chilies will be added if you would prefer to savor your Ramen at normal broth (non-spicy version). 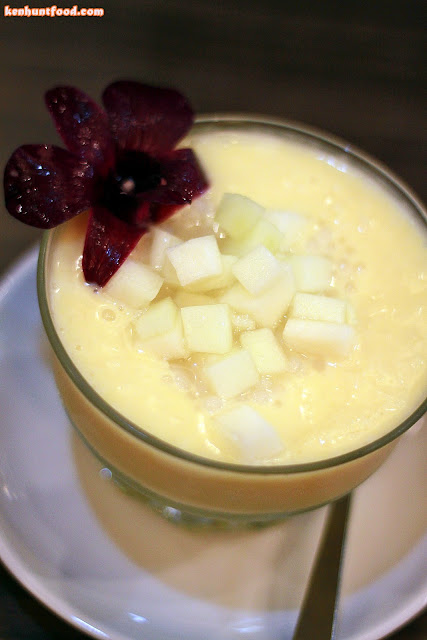 Our sweet endings began with their Signature Honey Dew Sago (Rm 7.80), this refreshing dessert has successfully resonated among the guests; the dessert has a very strong milky Vanilla flavor which we were told that Vanilla Ice Cream was added in the making of this dessert. A not-too-sweet dessert with impressionable quality indeed. 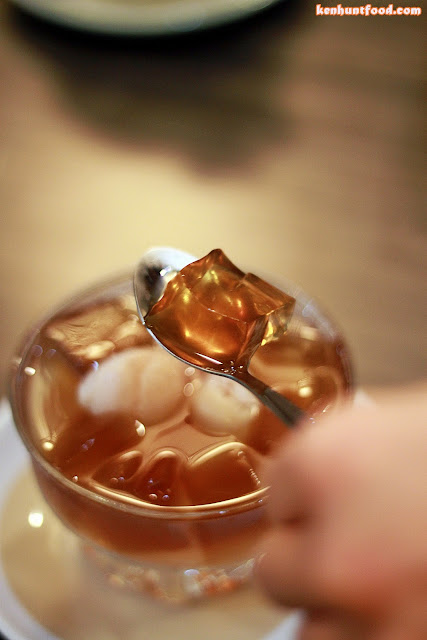 While this dessert Chilled Jelly with Lemon Juice (Rm 5.80) was okay as it looks paled in comparison to the other desserts served. I would personally prefer Lime Juice over the use of Lemon Juice. 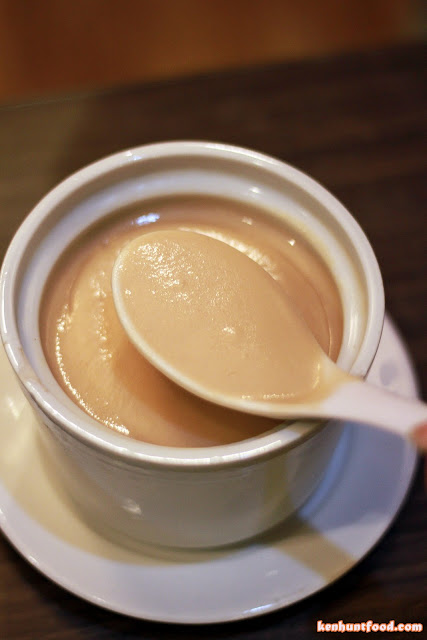 Creamy Peanut Soup (Rm 5.80) is another noteworthy choice. The rich and creamy Peanut Soup was abundant flavorsome with a hint of sweetness; resulting the meal ending with a very strong aroma of Peanut. Recommended for Peanut desert lovers. 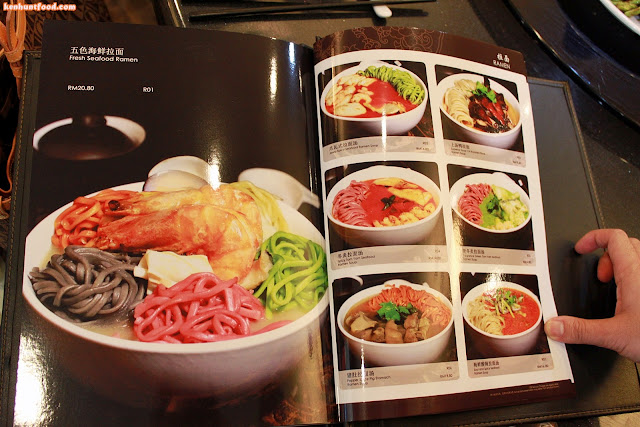 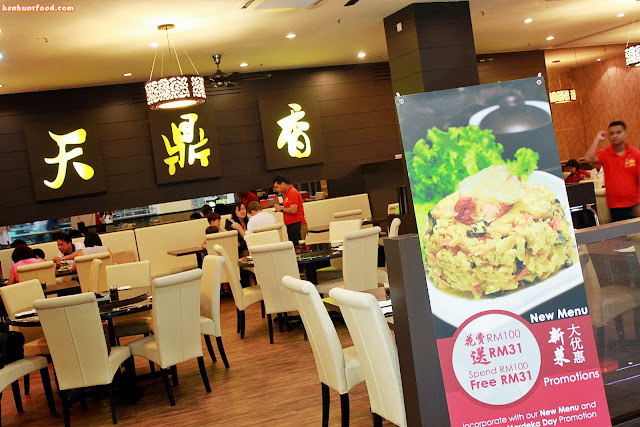 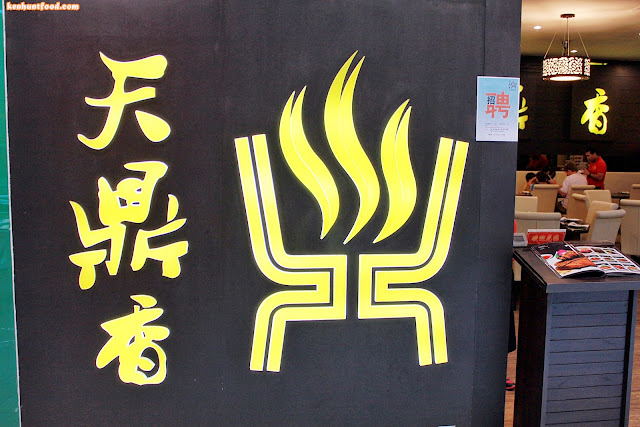