Modernist cuisine or Molecular Gastronomy might not be new to the world but it's definitely something to range over, particularly for Penangites. Innovation is a critical element when it comes to a modernist kitchen- not only that the Chef must change the customary way one would prepare and present the dish but the Chef must bring a change to how diners experience the food either. Adventurous eaters can make their way to the small alley at Nagore Square (where all the bars and small little shops located); A.Maze occupies a strategic corner right next to the vacant land; from outside, the restaurant suggests a nary of information on what it is about to serve, inside... there are only 8 seats arranged snugly facing a small kitchen manned by the Chef-Owner Chef Wei. The very young and talented Chef honed his culinary skills from overseas and had had working experience in Michelin-starred restaurants. A.Maze serves "Omakase" which literally means "leave it to the Chef", the menu is not informed to diners and it relies entirely on "trust" but Chef Wei is not a one-trick pony- diners' sense of taste is not the only thing that changes here... the "Omakse" menu switches once a month and it depends on the seasonal offering. Thanks to Chef Wei, we had the opportunity to join him in his extraordinary gastronomical journey.


Many Thanks to A.Maze for hosting us that evening. 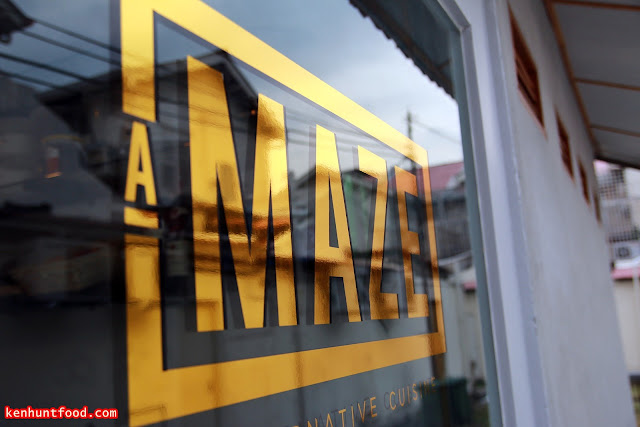 To experience the avant-garde culinary journey in A.Maze, it is recommended that you make at least one-day advance reservation. The serving menu is usually kept undisclosed but diners can indicate their diet-preferences (allergies/ religious practices etc). The menu (will be shared on their Facebook Page) changes seasonally but a standard "Omakase" dinner at A.Maze is usually Rm 128 nett (including beverages). Chef Wei would usually prepare 7 courses or 8 courses depending on the availability of ingredients and his specially curated formula. All courses are carefully designed following each and another, so does the in-depth of the flavors. But "Omakase" is not entirely about food, the dining experience counts as well. Diners get to sit closer to the kitchen and witness the entire cooking process as well as the meticulousness to prepare every single dish; sometimes... the whiff of cooking stimulates the palate as well. Of course, this allows the Chef to communicate with the diners as well; as for us, we were happy that we attended a "Modernist Cuisine 101" course with Chef Wei. Alcohol lovers would be glad to know that alcohol will be served during the dinner (with limited amount) and if diners were to bring their own alcohol, no corkage will be charged. 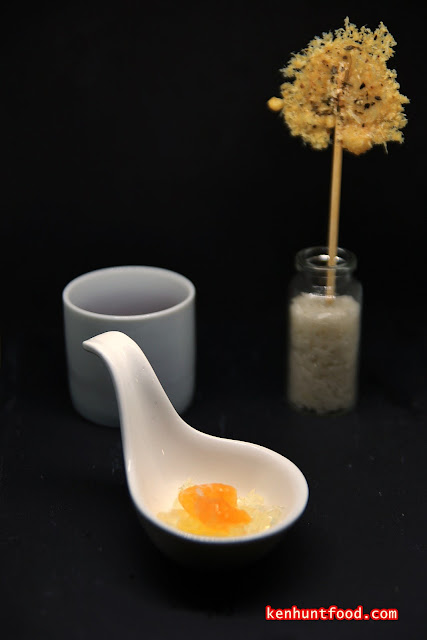 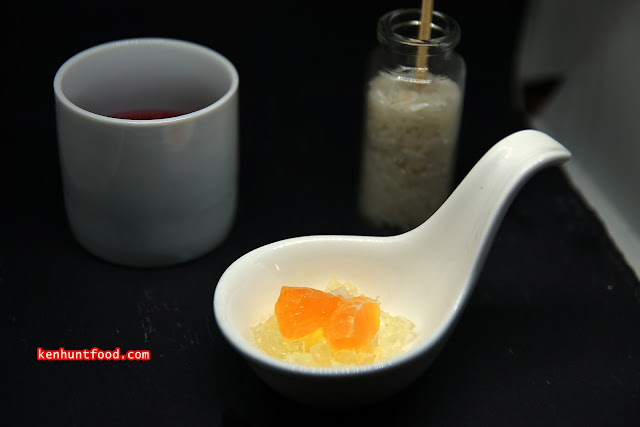 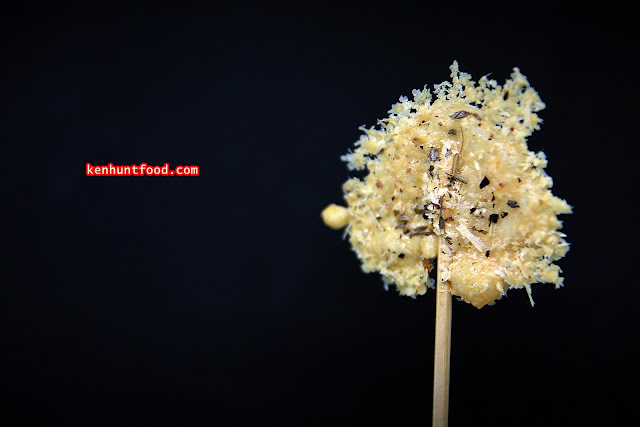 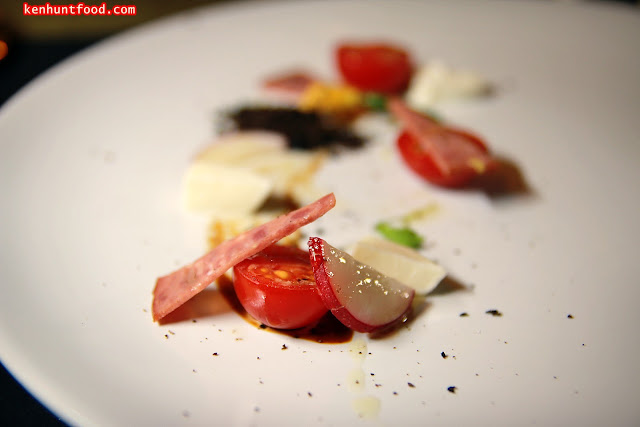 Chef Wei unlocked our senses by offering his Amuse Bouche that consists of sweet, sour, savory and a tingling of spicy-numbness. We started with the Lemon Jelly, a refreshingly tantalizing concoction to whet up the appetite for the ensuing courses; followed by Beet Root with Watermelon Consomme... a chilled soup that focuses on the natural sweetness of the vegetables and fruits, a little Coconut Water was added to smoothen the flavors and to introduce a sleek sweetness. We then ended with baked Parmesan Cheese in shattering crisp texture. It excited us with its cheesy-fragrant but as we thought we were done with it, it came back with a tingling numbness (Sichuan Peppers). 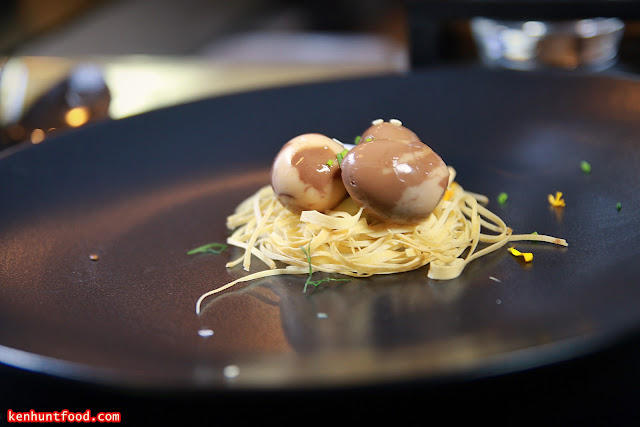 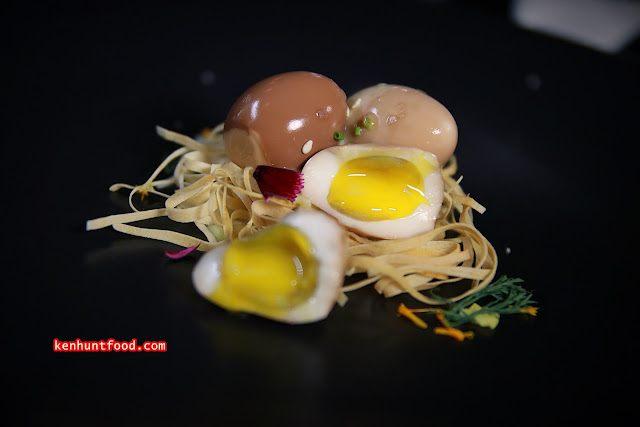 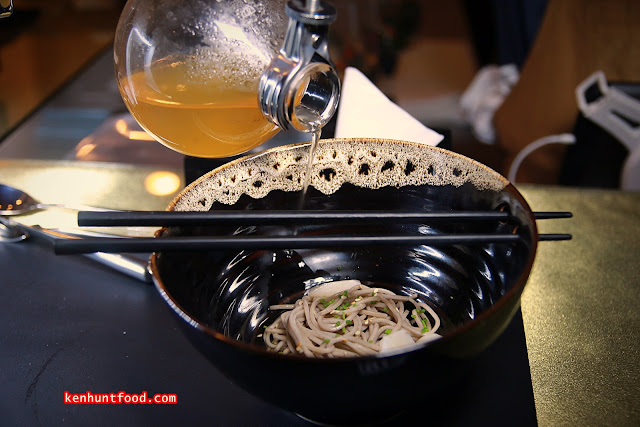 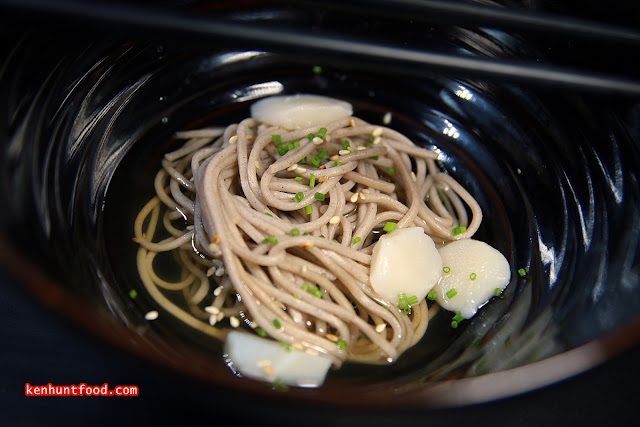 Shortly after we ended the first course, Chef Wei started to assemble the next course- an elegantly plated "nest" with Quail Eggs; the Quail Eggs were carefully cooked and braised... similarly to Onsen Tamago. Slit the egg through and you will find the golden-flowing Yolk oozing out, pouring over the crispy "nest". But the real draw of the dish was the Mashed Sweet Potato, the sweetness was spot on and complemented the other two ingredients well. It was a dish that could be enjoyed from different angles and combinations- "nest with egg" or "nest with mashed" or "mashed with egg". All combinations led to different outcomes and flavors.

Adding further excitement to the dining experience, Chef Wei pulled out 2 siphons and we were puzzled. He then presented a seemingly rich broth in golden hue and tucked in a siphon. The magic began with him boiling the siphon and fully accentuated the essence from "Konbu", "Wakame", Wolf Berries, Lemon, Lemongrass, Ginger, "Bonito", Dried Shitake and Dried Chilies. It was barely seasoned and relied heavily on the "umami-ness" of the broth. The Buckwheat Soba was served with the broth and some sous-vided Australian Scallops. 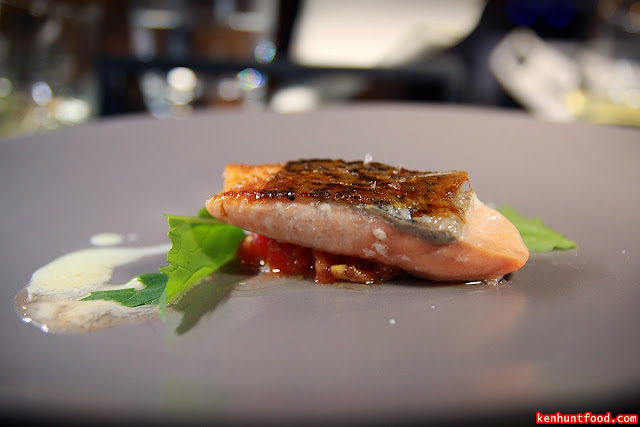 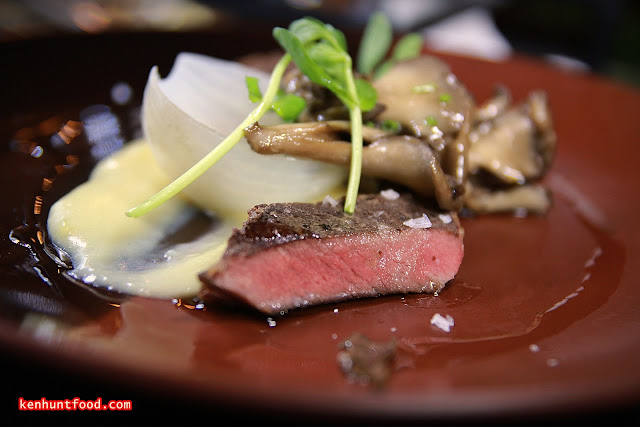 The main courses are usually paired with Wines; the sous-vided pan seared Salmon was served with Chacee, a tangy concoction of chopped Tomatoes and Herbs as well as Dill-infused Milk. The meat was fork-tender while the skin was beautifully seared to crisp; the Dill Milk provided a hint of the herbaceous flavor but did not overpowdered the Chacee. The proportion of the ingredients was right on the dot. It was paired with a well-chilled, fruity White Wine (Sauvignon Blanc- 2015).

Chef Wei tries to preserve the classical flavors using modern techniques, different cuts of Steak were sous-vided and served over simple sides. The Steak was lightly seasoned with salt, it was tender but not mushyly tender. It was good but perhaps, the flavors were conventionally simple. It was paired with an aged Red Wine (Cabernet Sauvignon- 2013). Non-beef diners may opt for sous-vided Chicken Breast. 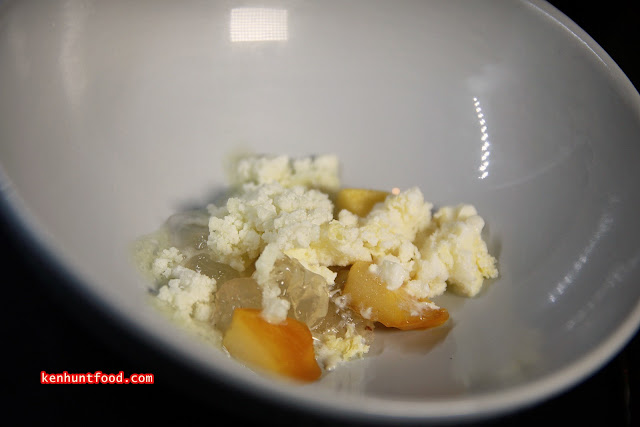 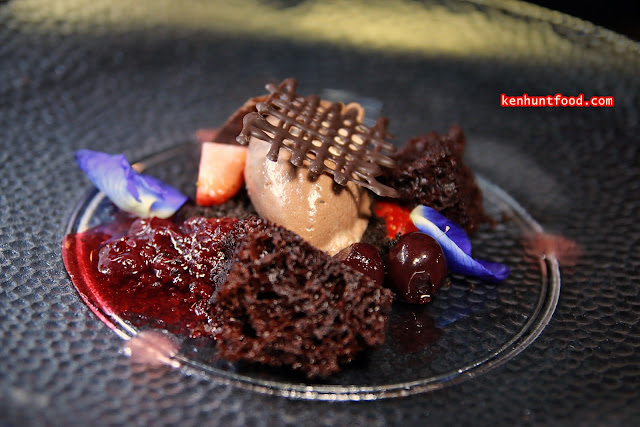 Palate Cleanser before the dessert was a mix of Olive Oil Sorbet, Jasmine Sorbet, Caramelized Apple and Mercato Agar-Agar. It was light and easy on the palate with faint Olive fragrance. The finale of the dinner was a German dessert- Black Forest inflected in another form. Chef Wei named it "Reconstructed Black Forest Cake"- Chocolate Siphon Cake, Cherry Compote, Chocolate Air, Chocolate Mousse and Chocolate "sand". The sweetness was expertly controlled to the right spot and can be easily accepted across all genders (the rule of male having lower sugar tolerance does not apply here). Though calorific, we trust the extremely chocolaty dessert will make any Chocolate lovers go "gaga". Chef Wei puts a complete full stop to the meal by magically pairing the sweet treat with Vodka Orange Cocktail. 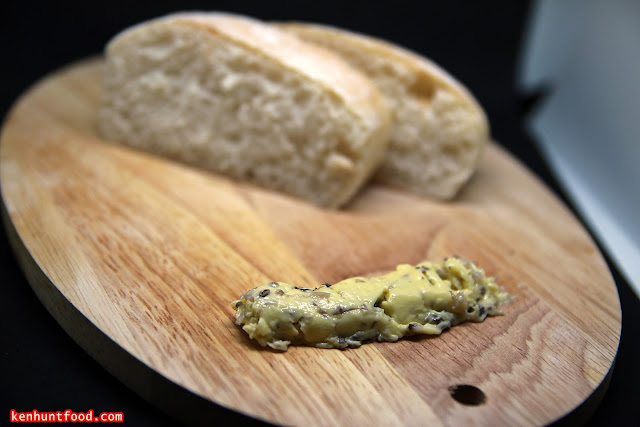 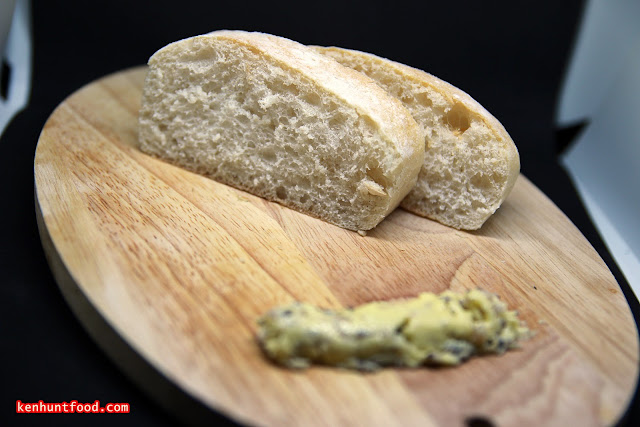 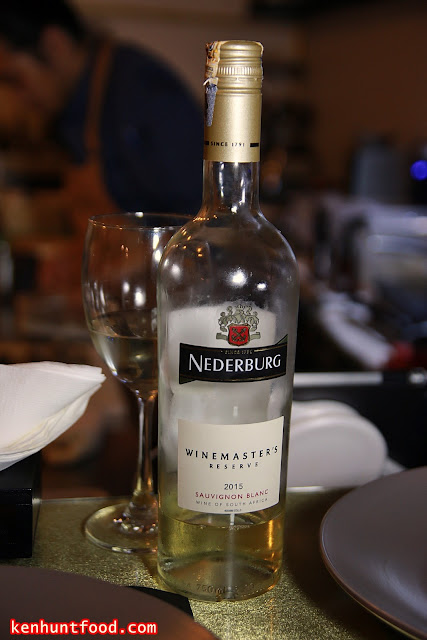 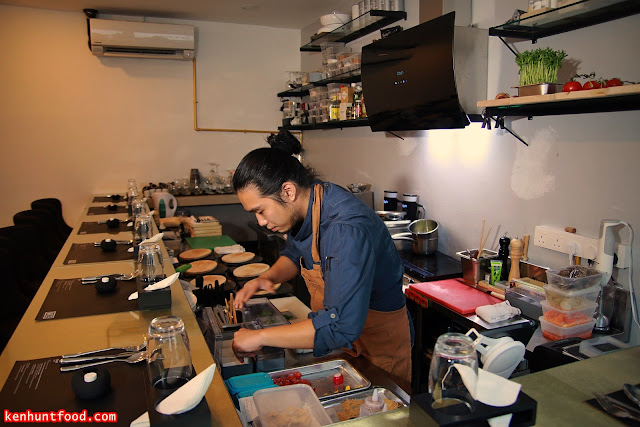 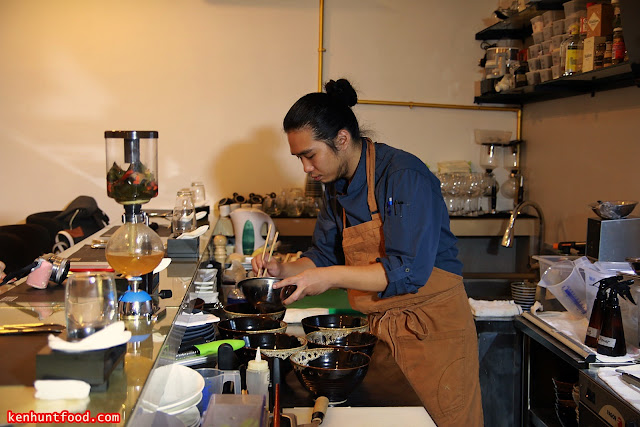 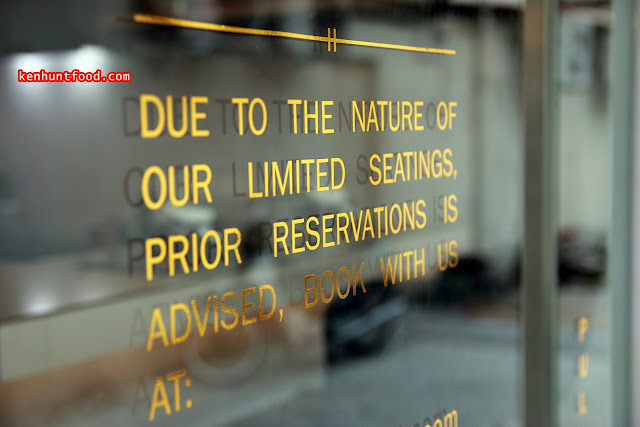 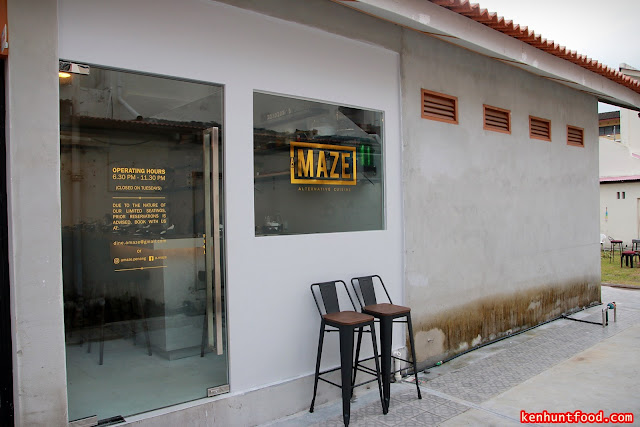