Korean's Table All Ban @ The Northam All Suite Hotel Penang.

*Update: A close friend of mine, together with her two family members were having dinner at Korean's Table All Ban. According to the restaurant's rule, they ordered three sets of course meal. However, the portion served was exactly the same as what posted in my blog post; which was insufficient for the group of three. The management of the restaurant claimed that the portion served to me (hereby refers to all the photos below) was for two and they did inform me. I would like to make a disclaimer, I was only told that they accept order minimum for two pax but since I was alone the other day, they decided to serve me. However, I DID NOT know that they were still serving the portion for TWO (in which I only paid Rm 32.80 nett). I thought the portion will be served according to the number of diners. My friend and her family were extremely disappointed with their dining experience. As such, we did see that there might be a tendency for inconsistency. Ken Hunts Food takes no responsibility from the discrepancy in serving portion and the photos below are solely for your reference only.*

Enjoy Korean food with a delicate touch at Korean's Table All Ban, housed within the iconic building along Jalan Sultan Ahmad Shah- The Northam All Suite Hotel Penang. The restaurant serves Korean food in a finer way, the menu is fixed and diners do not get to choose freely like most Korean restaurants. They are the only Korean restaurant that does this in Penang (by far). Opened in March 2015, the Korean Restaurant seems unusually quiet, an evidence in lacking of marketing. I get to know the restaurant by chance and it was indeed, a good find. Absolutely outrageous prices for the food- Rm 29.90 for 9 dishes, which equates to less than Rm 3.50 per dish. Best of all, most of the dishes I had were above par; the service was very attentive either (probably I was the only diner in the restaurant). The restaurant is cozy, spacious and fully air-conditioned. One of the best Korean restaurants not to be missed by Korean devotees. 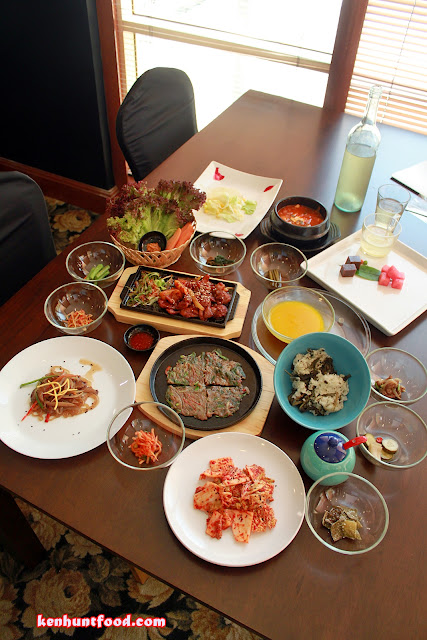 Choose either Seok Chan (Rm 29.90/ per person) for 9 dishes or Man Chan (Rm 39.90/ per person) for 12 dishes. The additional dishes appearing on the menu refers to additional order. The restaurant serves no ala-carte menu; that being said, you can only choose between Seok Chan or Man Chan to go with. Whether you have small or big appetite, you would still have to go for either one of the two choices. 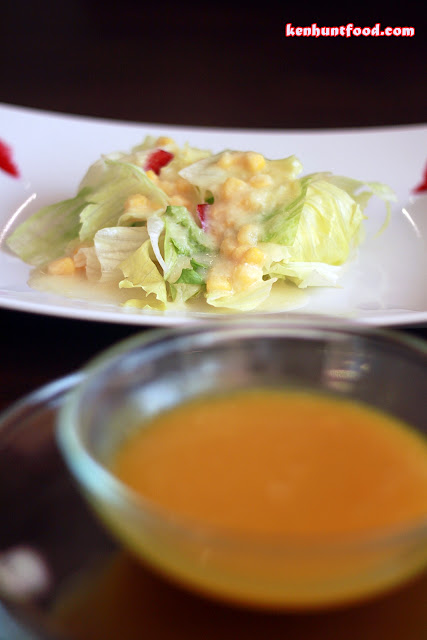 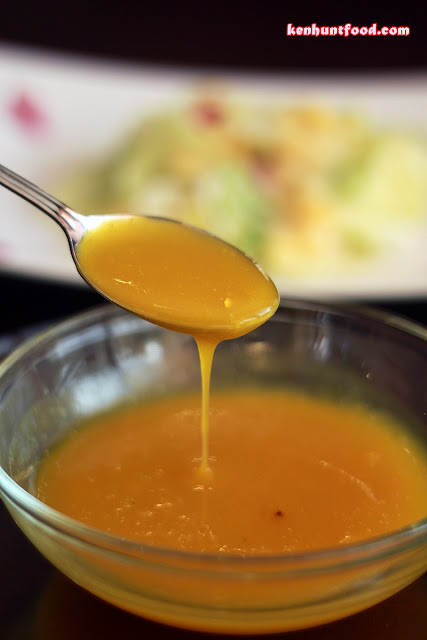 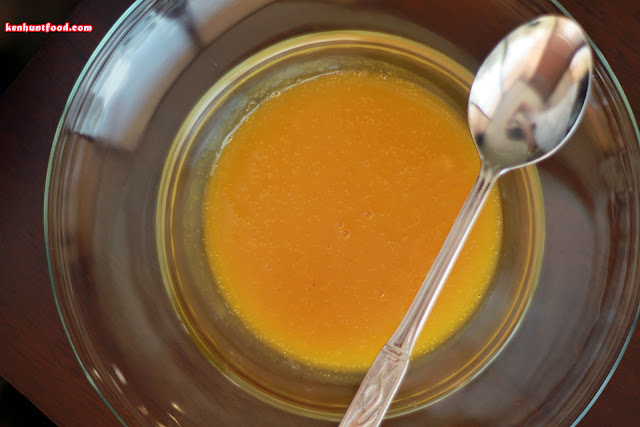 We started off light and easy with Fresh Greens dressed with their home-made dressing which carried a little of acidity; works pretty well with the greens. The first Pumpkin Porridge served to me was not a successful dish, it has a severe burnt smell. I asked for an exchange and they did admit the mistake after some checking with the Chef. They offered to change for me, which I gladly accepted. At least they took it seriously and admitted that it was their fault. The latter one was okay, creamy but silky smooth in texture; leaving a mellow sweetness in the mouth after the liquid sliding down the throat. Not overwhelmingly impressive but it was a good start. 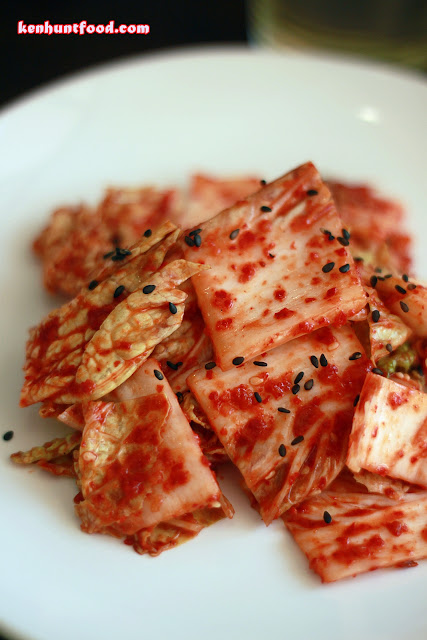 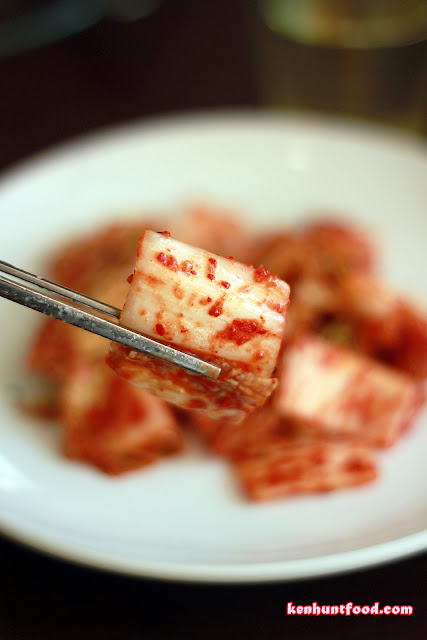 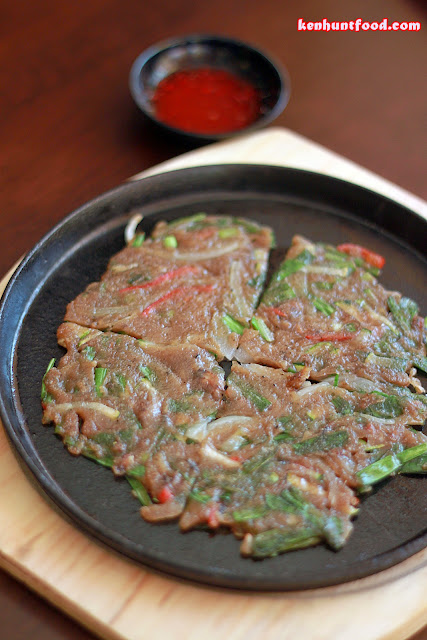 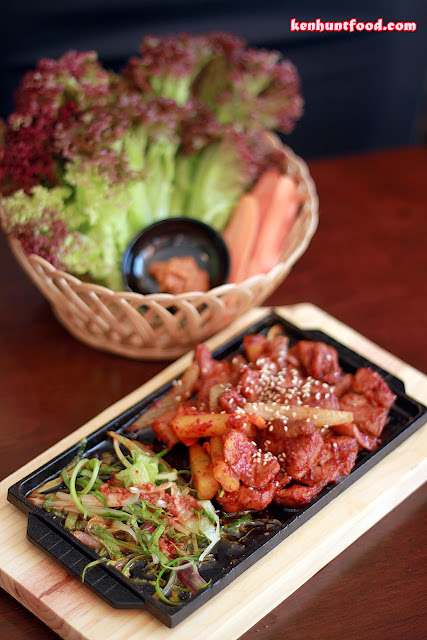 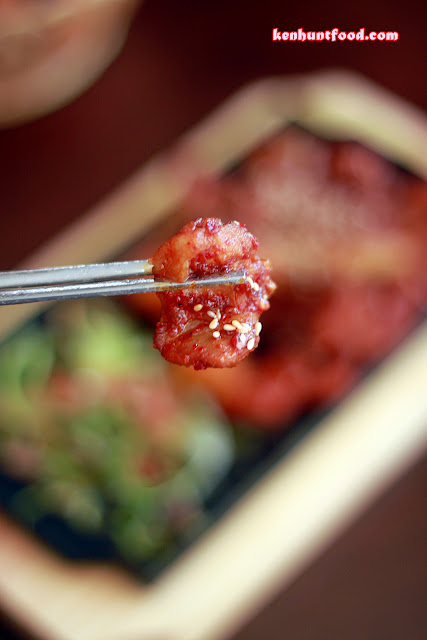 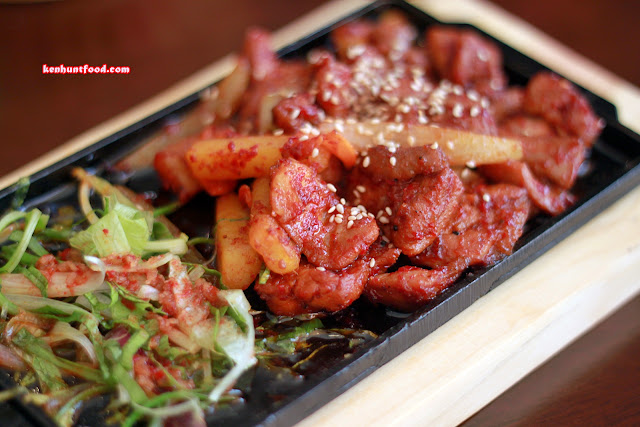 It is a must to try their home-made Kimchi; no, not the ordinary fermented ones. They serve fresh Kim Chi sans the acidity from the fermentation process; gives a more refreshing, juicier bite. The Kim Chis are refillable if you must know. The Pancake was nothing out of the average, the flavors were too weak to leave an impression in my mind. The Barbecue Chicken, on the other hand, was special in its own way. It has a familiar taste... akin to the Chinese Char Siew... spicier of course. The Chicken cubes were to wrap with the fresh Lettuce. Plump, well-balanced with flavors but slightly greasier to my liking. 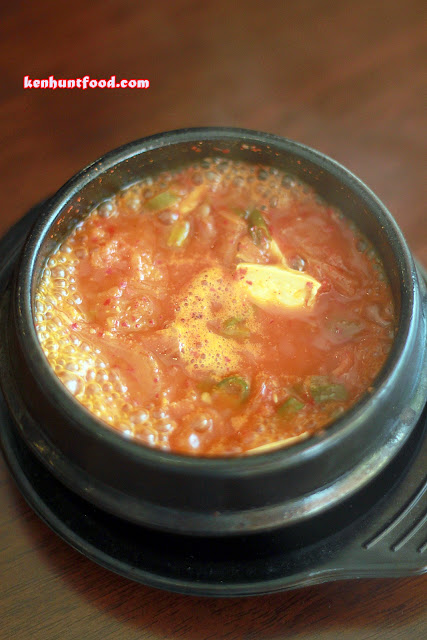 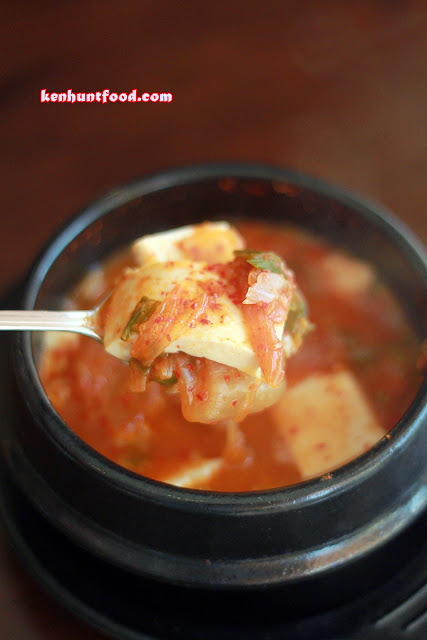 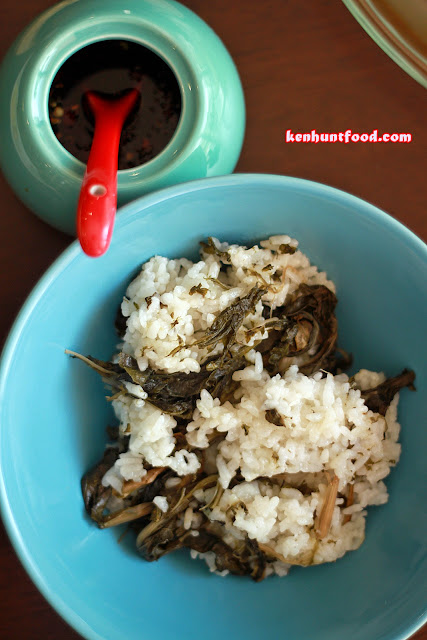 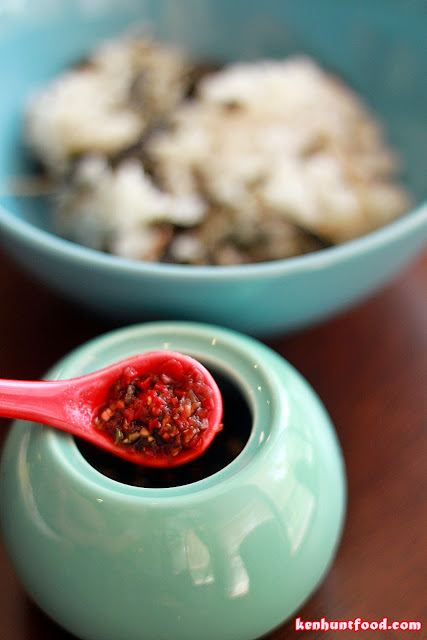 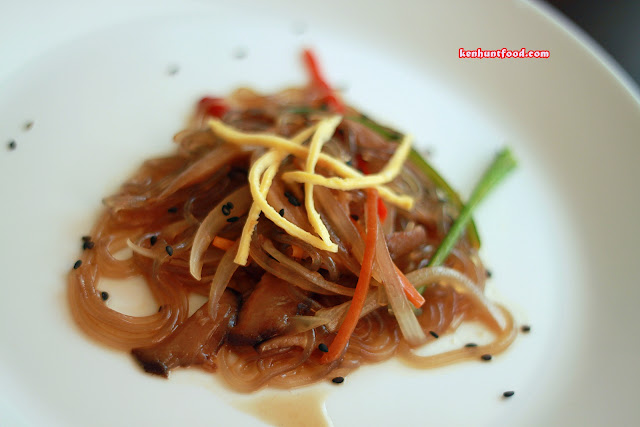 I was startled by the avalanche of flavors in the Kim Chi soup- a balanced medley of Sour, Spicy, Salty notes. Thin cuts of smooth Tofu were added in as well as a generous amount of Kim Chi. It was served to the table piping hot, so addictive that I finished every last drop of the soup! Another mind-blowing creation from Korean's Table All Ban that left me the deepest impression would be their Jap Chae, Korean Stir Fried Glass Noodles. Using two types of fresh Mushrooms- Eryngii and Shitake; they introduced a lovely earth flavor to the noodles, dovetailing flawlessly with the sweet and savory sauce. The noodles were carefully cooked to the right texture and all complementing ingredients were julienned to the consistent size either. A dish that will keep haunting me for a while. Tummy-filler was Korean Vegetable Rice in lieu of Bibimbap (they did ask if I want to try their Vege Rice, why not?); monstrous portion making it impossible for one to finish it entirely (after so many dishes). The rice was chewy with a leafy flavor from the greens. I was told that the greens do have medicinal effect which cleanses the digestive system. The condiment served along with the rice was basically.... Bird's Eye Chilies in Soy Sauce. 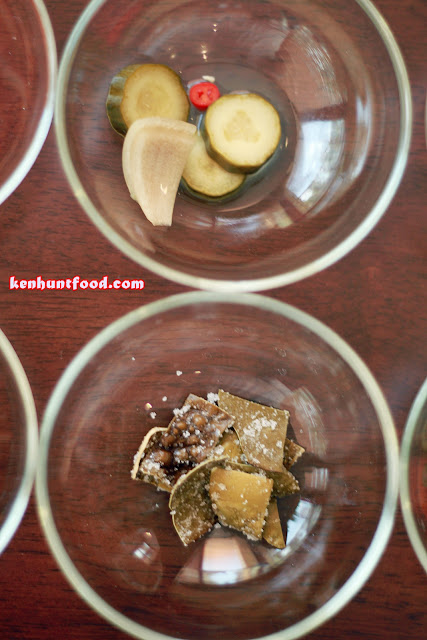 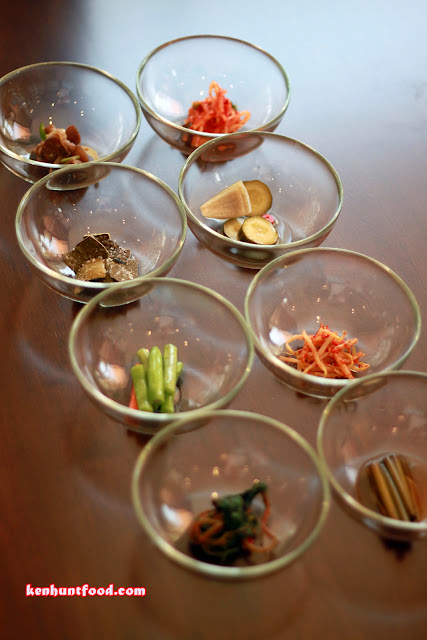 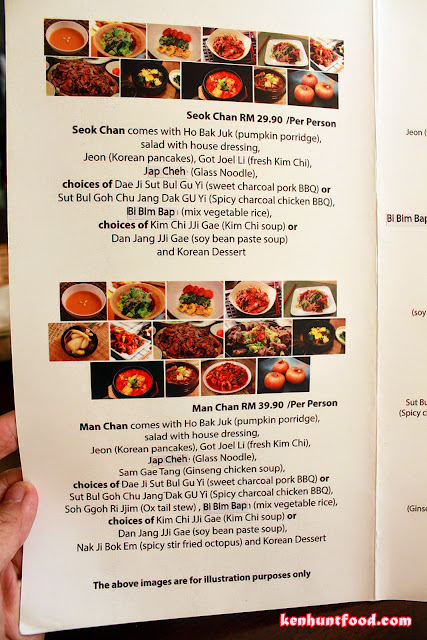 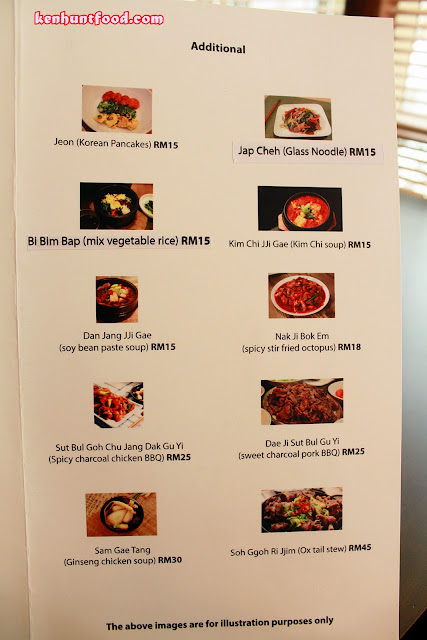 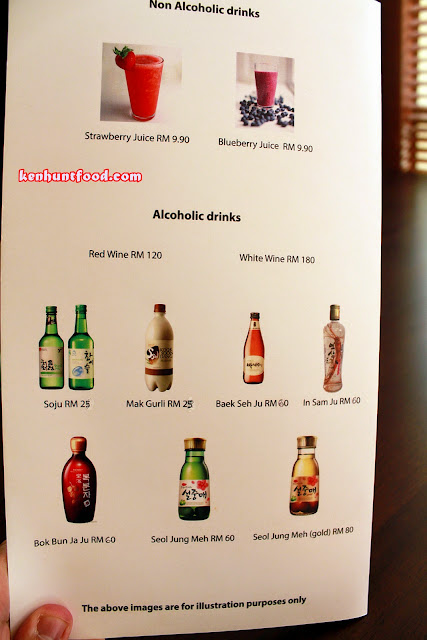 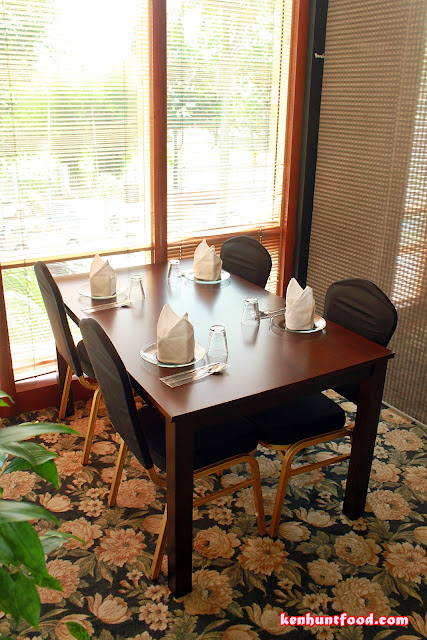 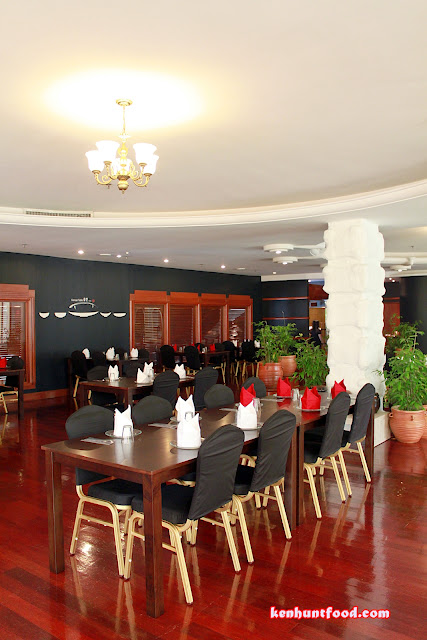 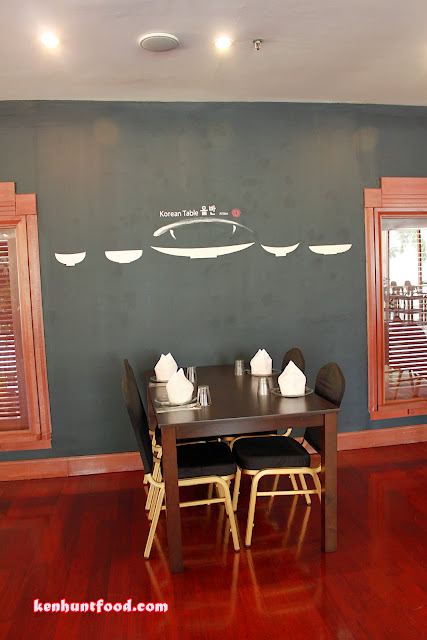 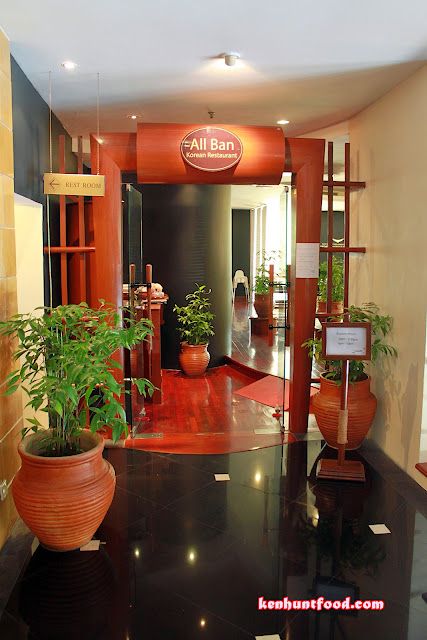