I remember few months back when I was skype-ing with my parents back in Perth, they've told me about this new Japanese eatery opened in Penang Road and it was full with customers. Since I am back now and I've decided to spare some time out to hunt this place down. Sakana is a Japanese restaurant which situated at Penang Road, beside Mydin and opposite to the Bazaar. Similar to Sakae Sushi and Sushi King, Sakana has erected a Kaiser Belt for its customers' convenience. The seating of the restaurant is rather narrow and can only fit 4 person at most (under one table), they actually advised us to sit right in front of the Kaiser Belt since there were 5 of us. With high expectation on this restaurant, it turns out to be disappointment........ 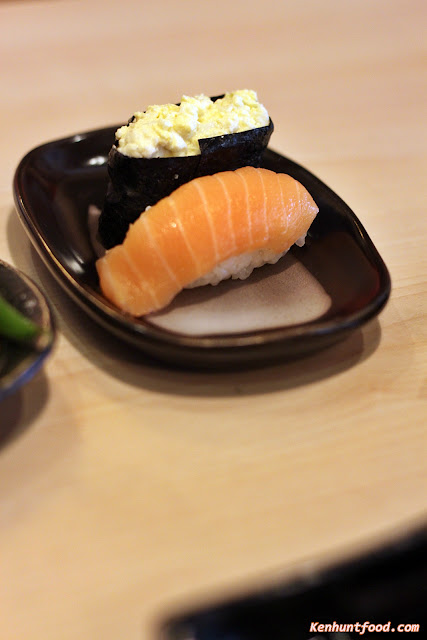 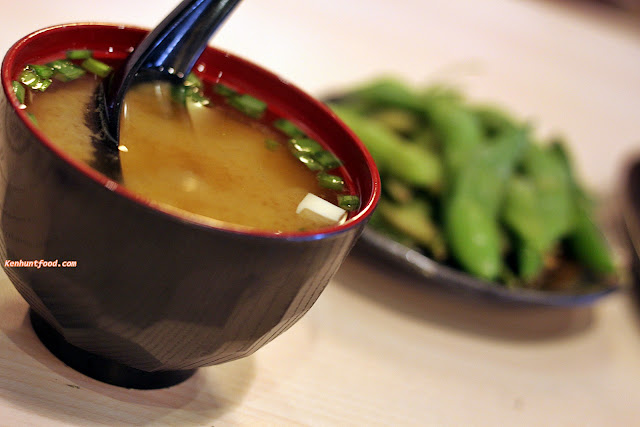 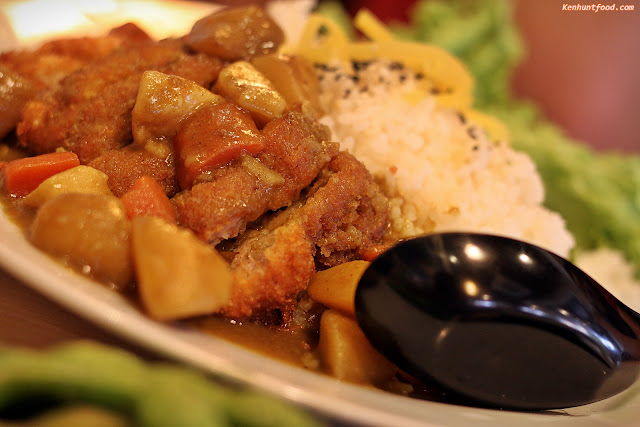 Chicken Katsu Curry Set (Rm 23) comes with a small plate of Edamame (枝豆), a piece of Salmon Sushi and a piece of Corn Sushi, Chicken Katsu and topped with Japanese Curry AND a choice of Miso Soup OR Green Tea. They do offer various Japanese Bento Sets in Sakana which come with reasonable prices. However, this Chicken Katsu Curry Set was rather bad in my opinion, the Miso Soup was bland (I will comment on the Sushi below) and lack of the natural sweetness inherent from Bonito flakes. As for the rice, it was hard, dry and doesn't possess the usual texture that Japanese rice should have. The Curry was okay but my friend commented that the sauce given was too little, it would be much better if they are more generous in terms of giving the Curry sauce. 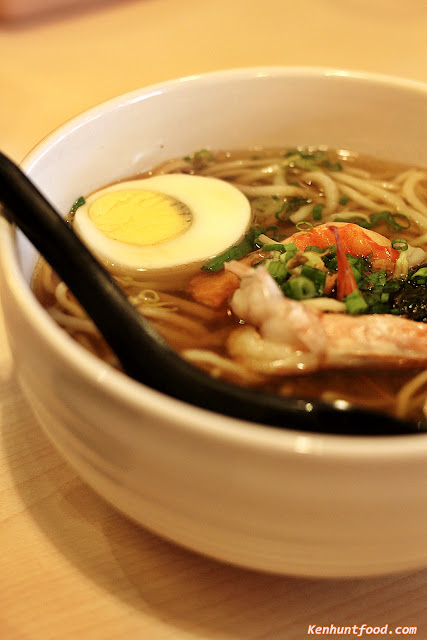 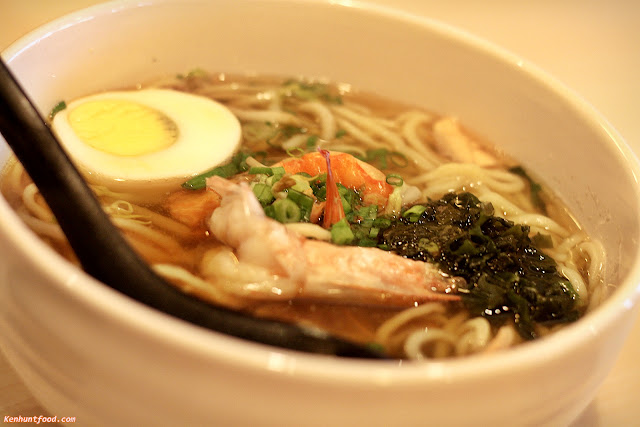 Seafood Ramen (Rm 15) comes with Hard Boiled Egg (halved), a Prawn, one piece of Squid and some Seaweed. It was horrible to see them serve the Ramen with Hard Boiled Egg that was bland, the Prawn was not too fresh and a pathetic piece of Squid. Not to mention that the soup (I won't call it broth) was bland and lack of flavors, as for the noodles, they were either over-cooked or they were lack of texture in nature. A disastrous Ramen indeed. 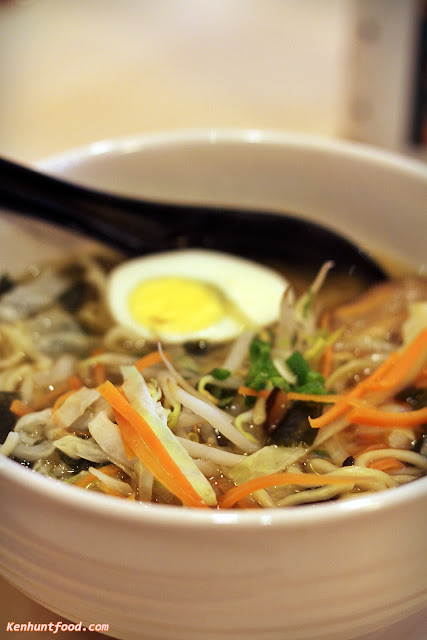 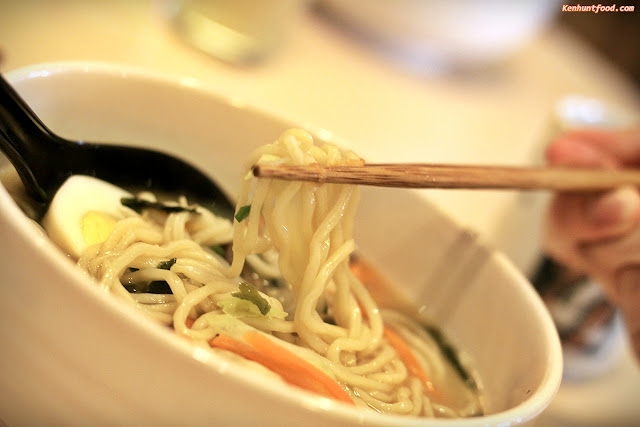 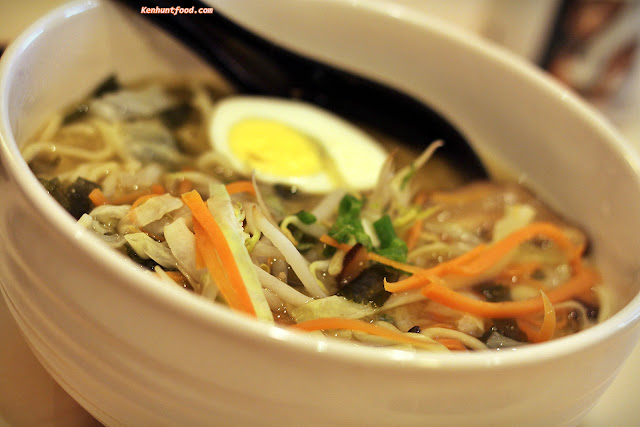 As for me, I had their Vegetable Ramen for Rm10, similarly to the Seafood Ramen, it comes with Hard Boiled Egg (halved), a mix of Vegetables (sprouts, carrots, cabbage, mushrooms etc). The soup was bland, noodles were lack of the bite and I had to rely on the Shoyu (Japanese Soy Sauce) provided in order to finish this bowl of Ramen. Could be good for some but the taste does not suit my exquisite taste buds for sure.... 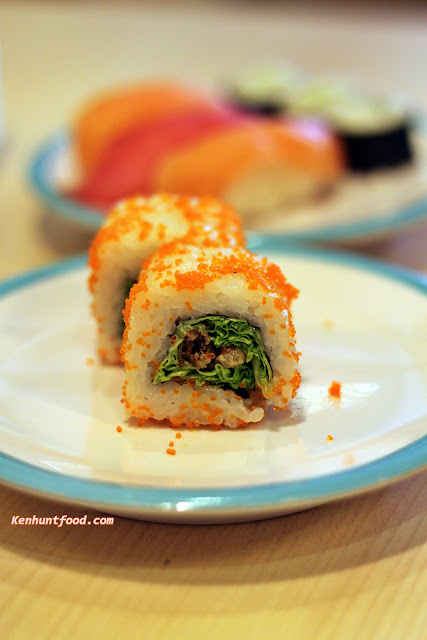 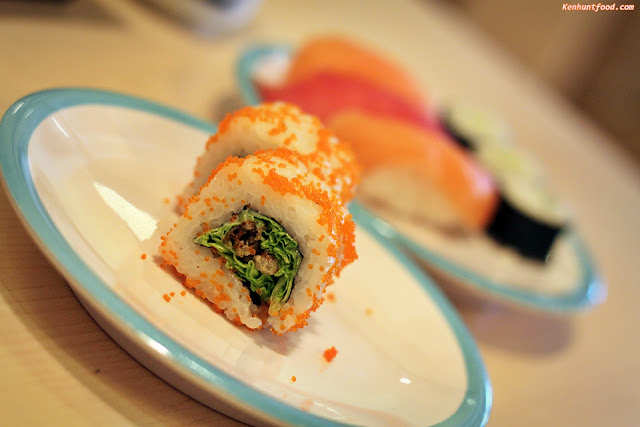 We do have some side orders as well, we had their Soft Shell Crab Rolls for Rm 6 (Rm 6 for any Blue Plates). My friend commented that it was decent just that the rice was a bit too dry and rough..... 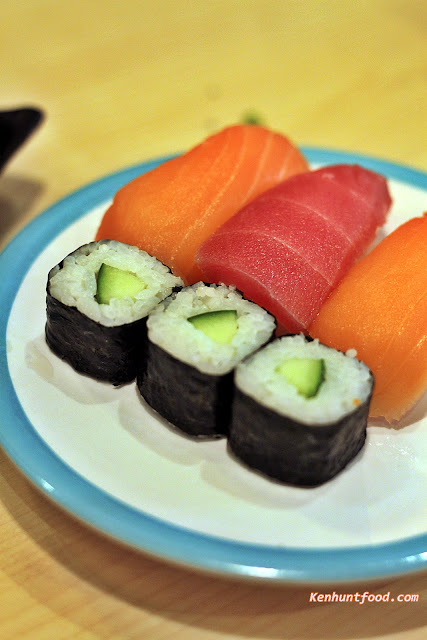 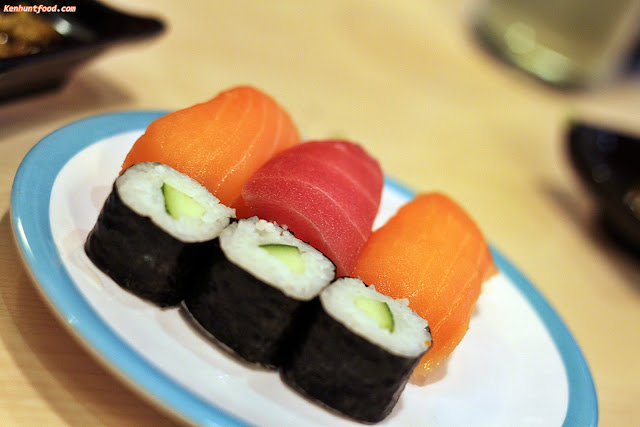 Another side order by us was this Mixed Sushi (Rm 6 for Blue Plates) which comes with a Tuna Sushi, 2 Salmon Sushi and 3 Cucumber Sushi Rolls. I have no complaints for the Cucumber Sushi Rolls (it just can't be wrong right?) just that the rice was a bit rough and dry as mentioned, however, the Salmon and the Tuna were thinly sliced and they were not fresh at all, particularly the Tuna. It has the "fishy" smell and wrong way of cutting it ended up it affects the entire texture. What a disappointment. 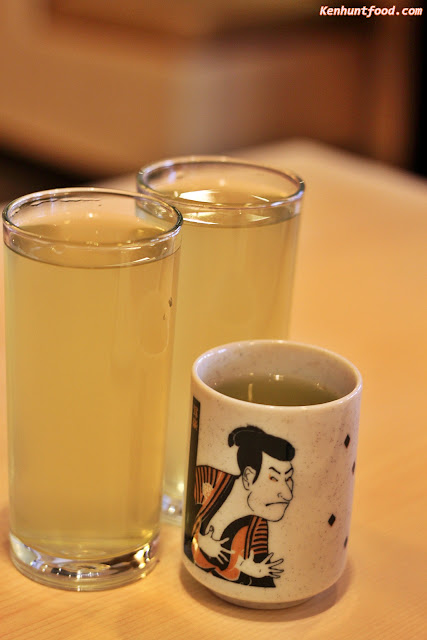 Sakana charges Rm 2 for their Ocha (Japanese Green Tea) but the Ocha was rather diluted and lack of flavors. 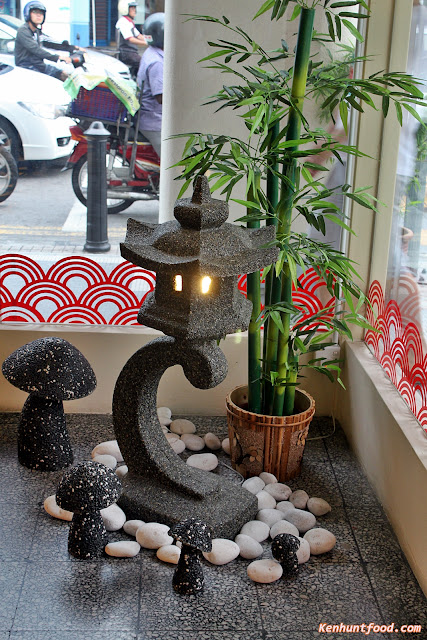 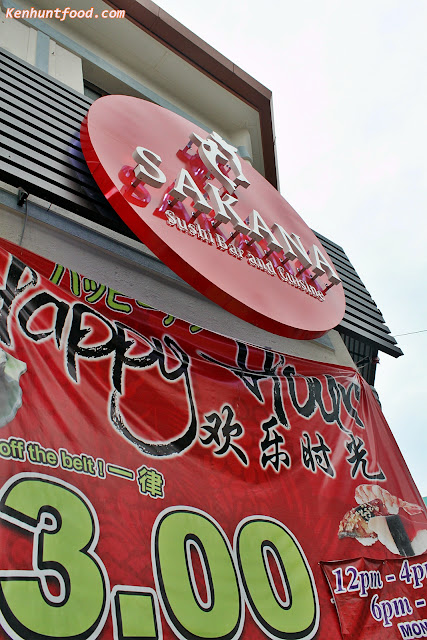 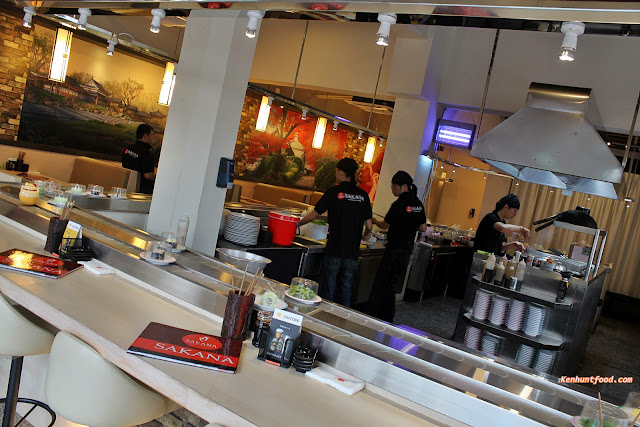 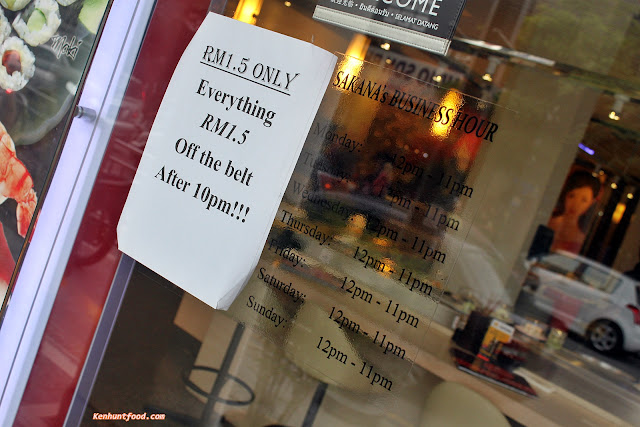 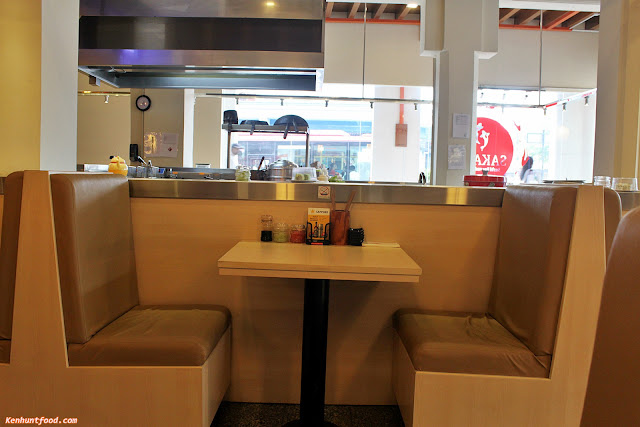 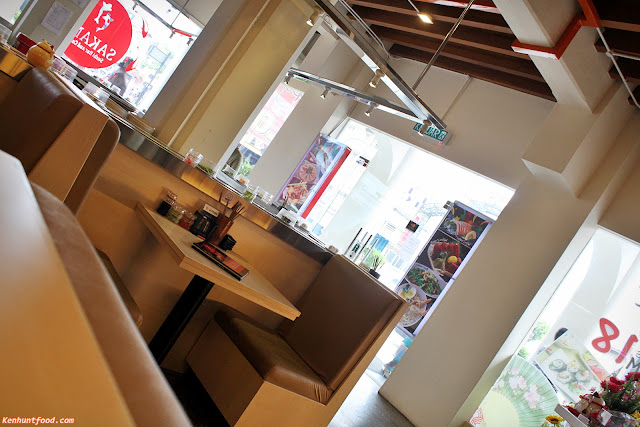 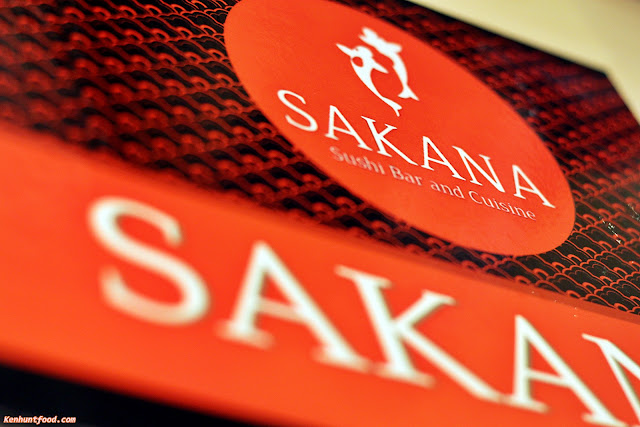 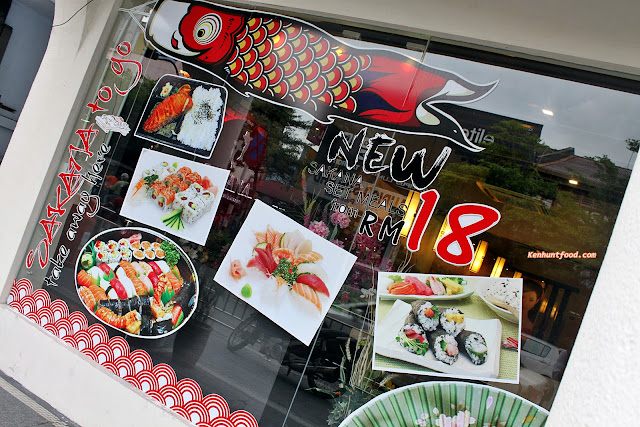