There is this small and hidden restaurant located at one of the busiest road in Penang, Burmah Road, which serves both local and western cuisine with absolutely affordable and economical price. Romantically named under one of the most beautiful sea in the world which I believed it was meant to suit the theme of the restaurant. The restaurant itself has a very good ambiance, they also have a wall of tiles where customers can have their signature signed on the tile and place the tile onto the wall especially those who have had their party organized there. Santorini does organize parties for their customers too, be it birthday parties, gatherings or any possible functions. They offer a wide range of western food too where set lunch and set dinner meals are possible with an additional Rm2 for lunch (1 regular drink and 1 scoop of ice cream) and Rm5 (mushroom soup, a cup of drink and a small portion of dessert) for dinner. The only draw back for dining in this restaurant will be the parking. Although you are allowed to park right in front of the cafe, but due to limited spaces, the place can only fit in 2 to 3 cars maximum. Knowing this, the management will refund Rm1 for those who parked their car in New World Park or Chow Tian Yang Aquarium nearby (maximum of 2 redemption for 1 bill ). 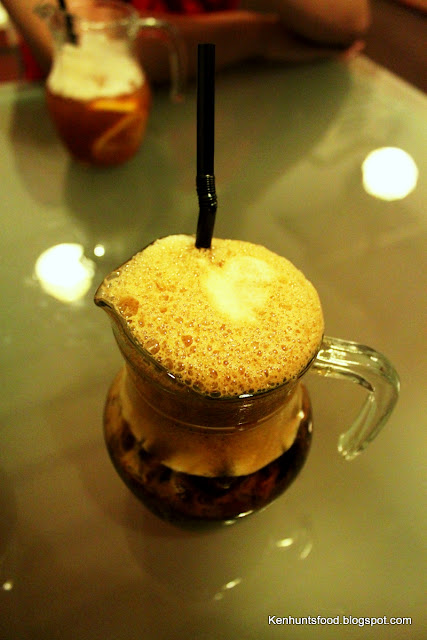 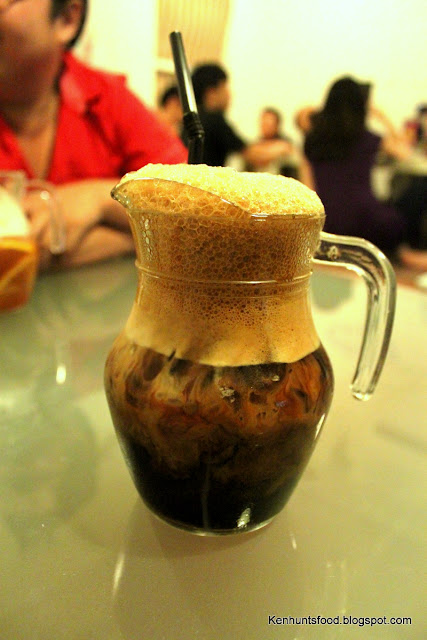 We were having dinner, so with an additional Rm5, we were entitled for the set dinner which includes a mushroom soup, a drink (coffee dance, tea dance or ice lemon tea) and a small portion of dessert. This was their Coffee Dance, presented in a very attractive way, the coffee was very smooth and flavorful too. 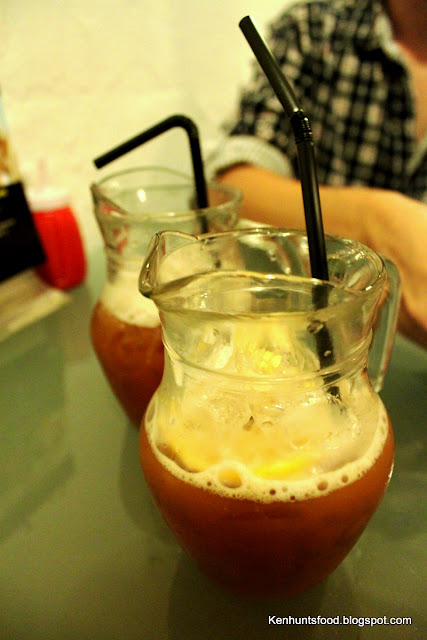 Ice Lemon Tea which comes in a few slices of lemon, the drink was rather sourish which was quite healthy I believed since the using of sugar/honey was minimized. 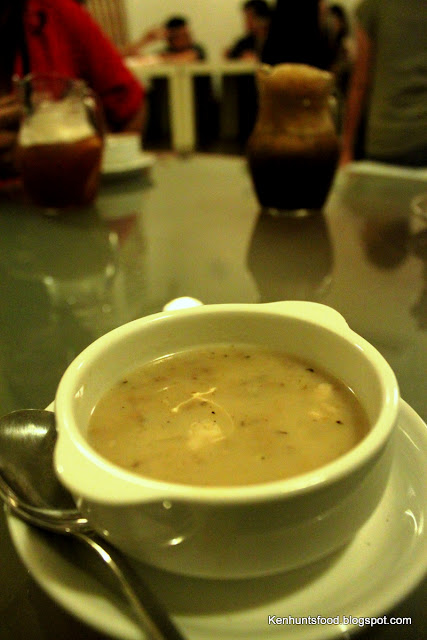 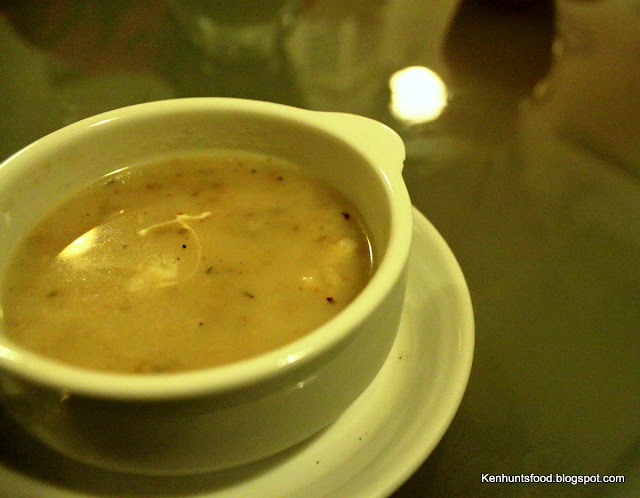 Mushroom Soup that comes together with the set dinner. The portion was okay but sadly, there was not any bread given, I always prefer to have a bread around whenever I am having mushroom soup. Their mushroom soup was creamy, smooth and reasonably flavored as well. 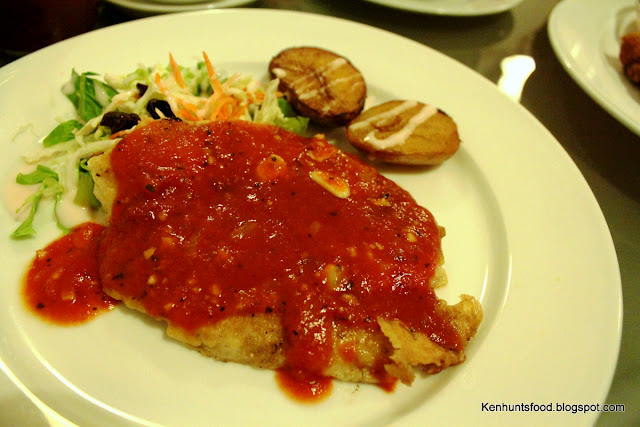 Sicilian Fish (Rm 12.90 prices shown are exclusive from the additional Rm5 for set dinner) Sicilian simply refers to the people of Sicily, a place near to Italy. The sauce was made from something similar to the tomato pasta paste with some additional herbs topped on it. The fish was perfectly cooked and possessed a very tender and juice texture. It completely dissolved in my mouth without much chewing. The side dishes were rather healthy as well, and it would be too dull to have french fries as side dishes all the time. Beside the refreshing coleslaw, baked potatoes were added too. Perfectly baked potatoes with a drizzle of olive oil and some mayonnaise, simply perfect. 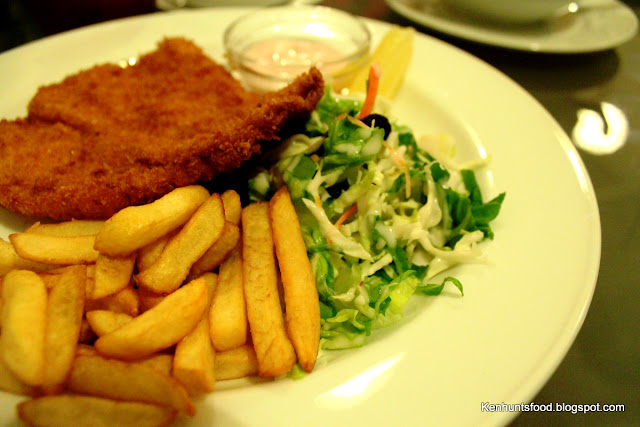 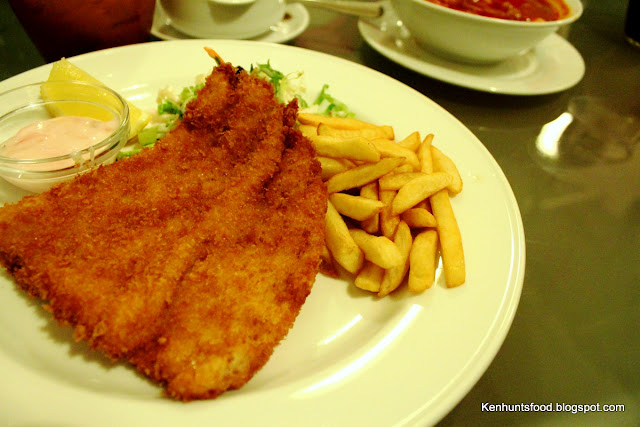 The Fish And Chips (RM 10.90) comes in a very huge portion, it covers up to more than half of the gigantic plate. Lemon and mayonnaise were given too, a squeeze of lemon juice just enhance the flavor and reduce the oiliness of the whole dish. The fish was very tender as well. I strongly recommend this considering the portion and the price. Cheap YET good. 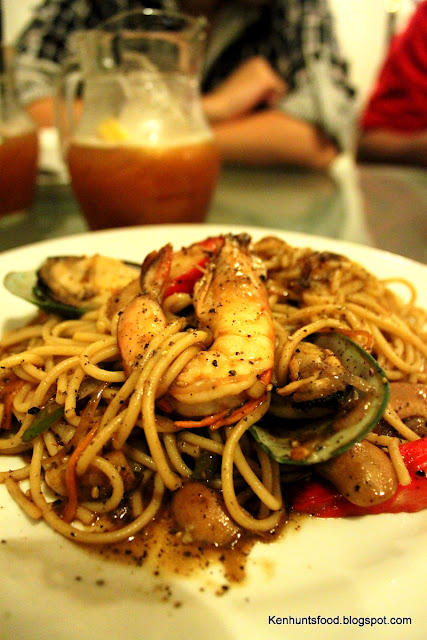 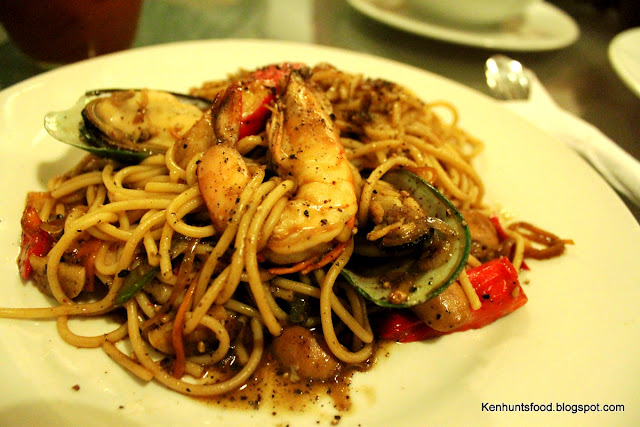 Black Pepper Spaghetti (Rm 11.90). Again, they never let us down by showing this huge portion of spaghetti again. It comes with quite a generous amount of seafood as shown on the photos. The prawns and mussels were very fresh and they even peeled the prawn shells for us. The black pepper taste was quite heavy and the black pepper flavor was sufficiently covered for every single mouthful. 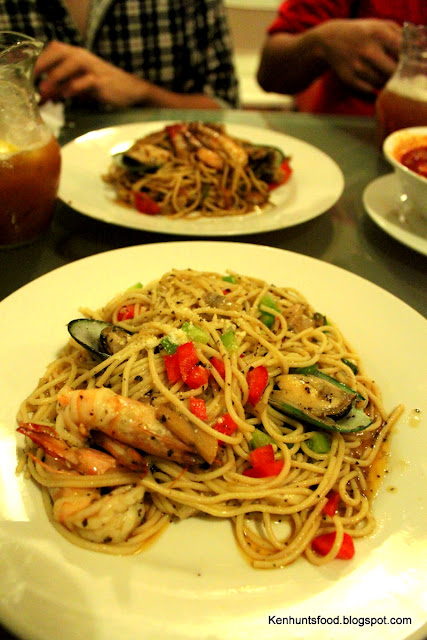 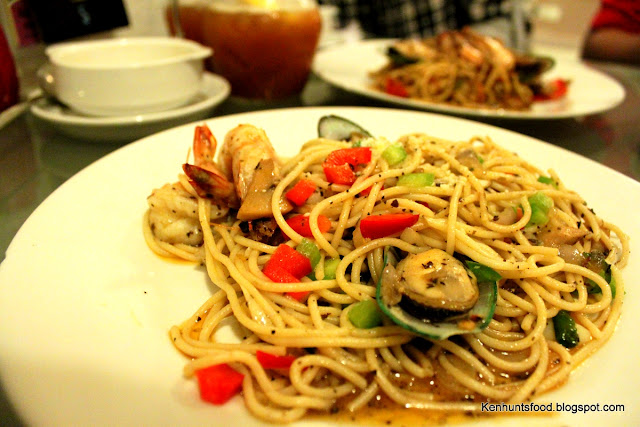 Olio spaghetti (Rm 11.90) as olio refers to a dish that has many ingredients and highly spiced and cooked together, I think they have successfully maintained what an olio spaghetti should have. Similarly to the Black Pepper Spaghetti, there were a lot of seafood included as well. I would prefer this over the Black Pepper Spaghetti, probably due to my own preferences towards the heavier garlic flavor. 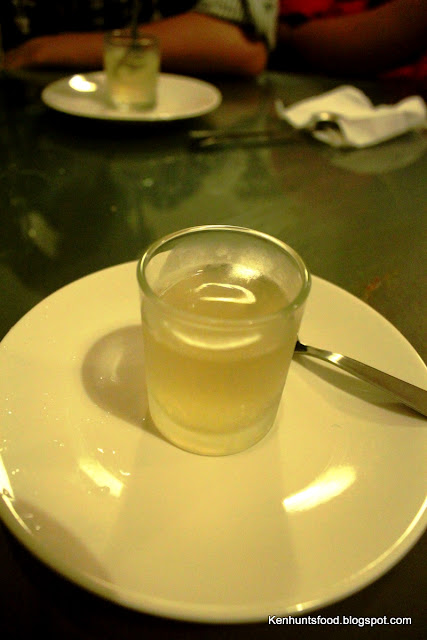 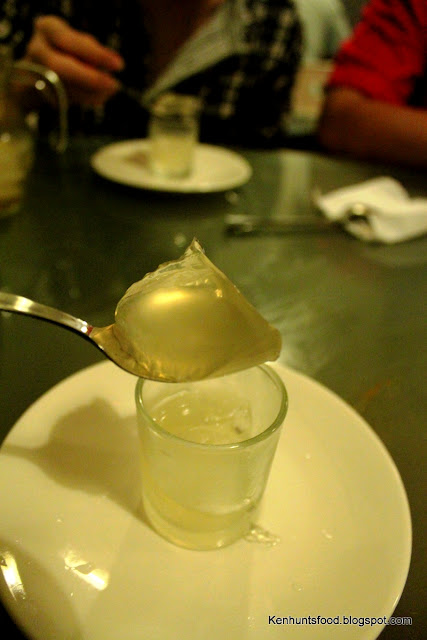 Their complementary dessert, the flavor was quite similar to coconut juice, it was not sweet at all, just nice. 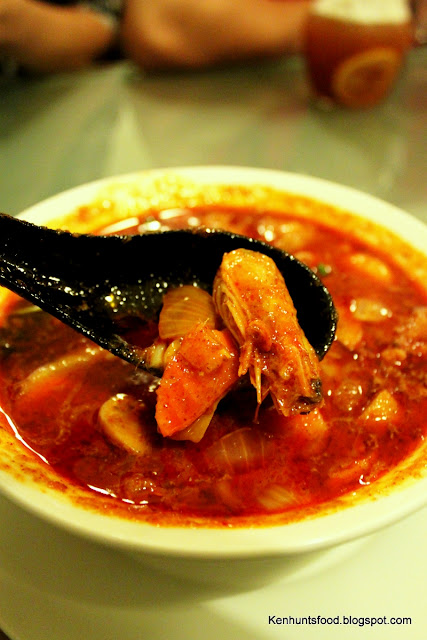 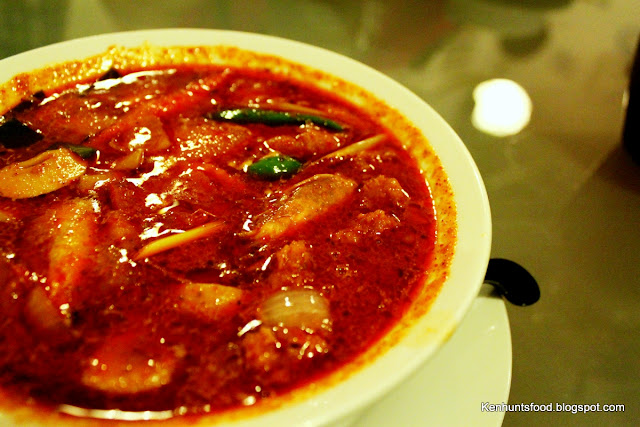 It looks like curry ? This was actually their Tom Yum Soup (Rm 7.90), it was not from any set meals, its an ala carte dish. The Tom Yum was quite disappointing as the soup was way too thick to my preference, the chili oil was a bit too much either, unless you are having this with a bowl of white rice, otherwise, it would be a bit unsuitable to drink it as a soup. 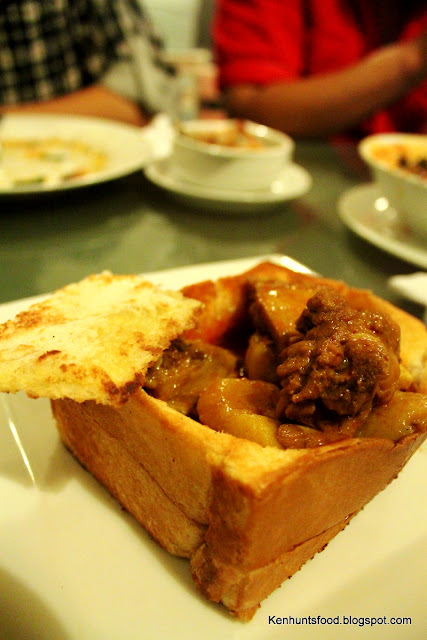 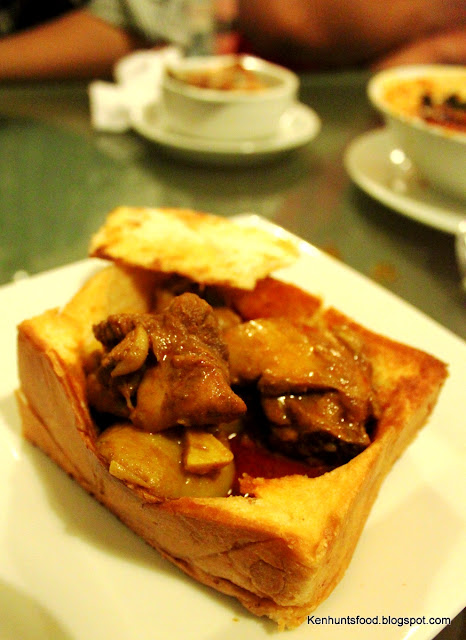 I had something similar like this before during my trip to Taiwan, where they called it "the coffin" (棺材板) where they deep fried the bread and some fillings were inserted inside. Similar concept, this dish was named Curry Box (Rm 6.00), instead of deep frying the bread, they pan fried it which was obviously, healthier. The thick bread was nicely cut and stuffed with curry chicken. The bread soaked with curry was extremely soft and juicy, it absorbs the curry flavor as well. The chicken was very tender so do the potatoes. Strong recommended to my readers to try this dish out as I find it special and its quite rare to find one in Penang. 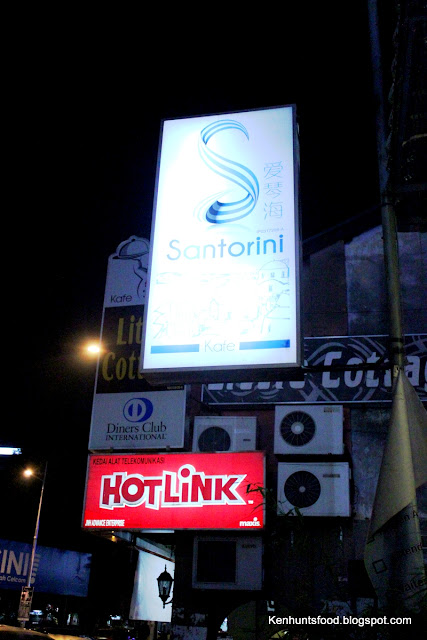 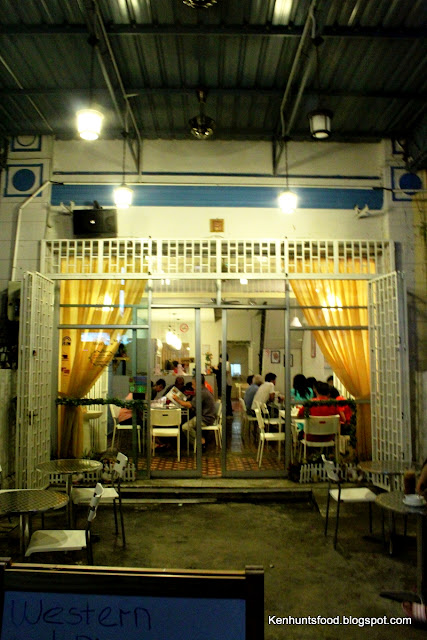 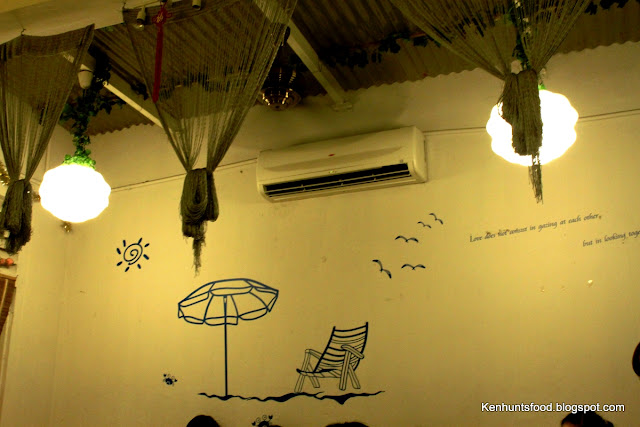 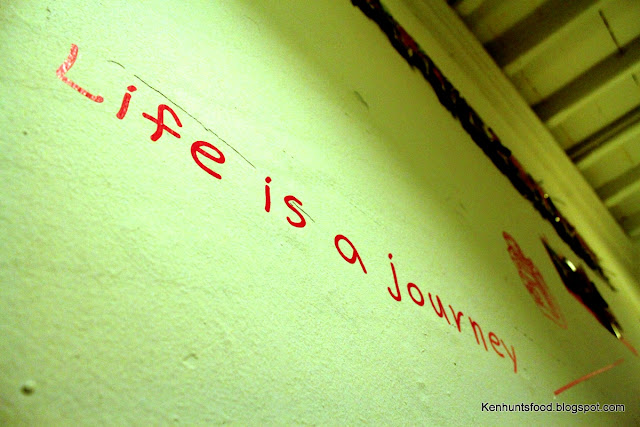